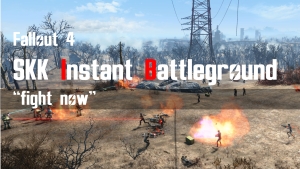 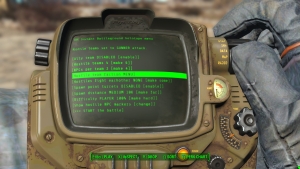 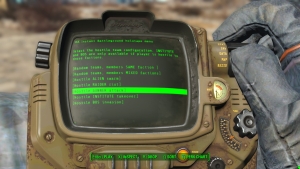 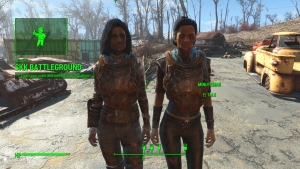 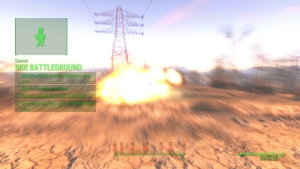 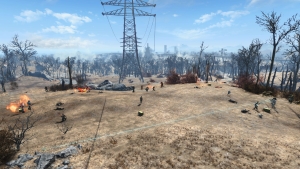 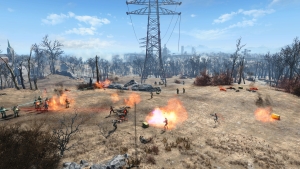 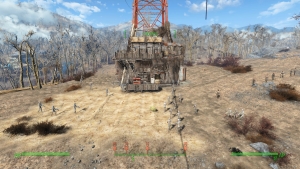 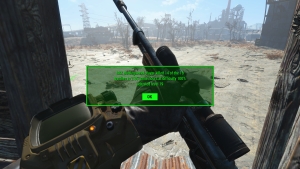 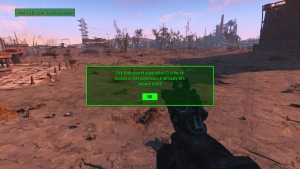 Do you sometimes want a fight right here, right now ? No matter where you are in the Fallout 4 exterior world, SKK Instant battleground will spawn up to 64 hostiles who will fight you, your allies and each other for instant gratification. Generate leveled teams of allies, hostiles and turrets to stop building and get shooting.

Using a [.SKK] holotape which appears in your MISC inventory (or crafted at a chemistry workbench) you can configure an instant battle with:

6) Turrets can be generated at the spawn points.

9) Map/Compass marker display options to either track hostiles, only show the hostile spawn points for direction, or show nothing for hardcore. Player killed lootable bodies are always marked after the battle.

Most of the options can be randomised if you enjoy surprises.

When you start the battle through the holotape menu, a crate of basic leveled weapons is spawned next to you with your optional team of allies. Your allies are followers rather than companions, so will follow and support you in combat but are not commandable. If a unique weapon is spawned in your crate, your allies will loot it out to use if you leave it for too long.

Within 30 seconds of closing your weapons crate (your get-away time), the hostile teams spawn in a circle around the crate at the configured range. They head for your crate as the battleground center marker looking for trouble, and may fight each other on the way. Once they reach the crate, the surviving hostiles will track you and follow you to the death. If you run too far away (over 10K units*, no numbers showing on the compass markers) hostiles may freeze and wait for you to come back, or despawn if they are stuck. If you hide in an inaccessible place by blocking entrances or dive into an interior cell, the hostiles may freeze or warp into your space. Surprise !

64 hostiles rampaging in Diamond City
ARE YOU NOT ENTERTAINED ?

The holotape can be used to stop the battle at any time. This will also clean all the spawned assets (live, dead, crates, turrets) ready for another battle, so you can fight as many times as you want. The mod has zero performance or resource overhead on your system when a battle is stopped and cleaned up.

If you like free stuff, loot the bodies and hostile spawn site crates before they disappear in the cleanup. Note that this is a combat mod not a loot fest, apart from the player crate and legendary enemies, don’t expect heaps of good stuff.

Start battle conditions:
1. You must be outside, else the start battle menu option is hidden.

2. You must be more than the selected spawn distance from the edge of the map else you will be warned to move or reduce the distance.

Compatibility: The mod has no dependencies on extenders or DLCs and does not change any base game assets or objects, its 100% pure new Creation Kit forms and scripts.

The mod can be disabled if there is no active battle and the Stop & Cleanup function has been run. Only remove mods if you are happy to accept potential conflicts from load order changes in a save game.

(a) If [.SKK Battleground holotape] is missing from MISC inventory, it can be crafted under utility at a chemistry workbench.

(b) Swimming is enabled for hostile travel, so robots may be stalking you … underwater.

(d) If multi-level freeways are within the spawn distance, hostile NPCs may spawn and become stuck on a middle level. Sanctuary house roof tops also.

(e) Combat aliens have custom blaster weapons and ammo that disappear on death as they are unplayable for loot.

(f) The game engine automatically cleans up dead bodies (iRemoveExcessDeadCount & etc) , so you may not find all hostiles to loot.

(g) If you are over 10K distance units from a hostile NPC it may freeze until you get closer (a reminder notification is shown) or despawn.

Now with the option of Turrets at spawn points.

DANGER CLOSE! spawn distance with a Broken Arrow airstrike.
Option for hostile teams to be made of mixed NPCs.