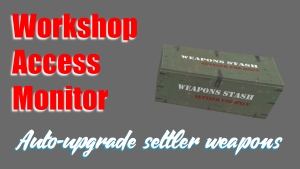 Monitor workshop access by NPC actors and configure the automatic return of weapons, ammo and legendaries looted by them. Option to automatically upgrade weapons from an approved global weapons stash.

Install this non intrusive mod at any time in any game, as it makes no static changes to your game at all. After waking in V111 cryo or moving in the Commonwealth the player is given a regenerating [ .SKK Workshop Access Monitor ] aid item for menu configuration and commands (craft replacements in the chemlab).

The ability for NPC actors to loot containers to upgrade weapons (based on value or dps no one really knows) and ammo during combat is hard coded into the game engine, which can become hassle if you run a lot of workshop attacks. This solution detects NPC actors accessing your player owned workshops to enforce your policy.

Update 003 includes a central weapon stash for settler returns & upgrades, with access activators which can be crafted (furniture/containers) at each workshop. If one is present, settlers will use the central stash rather than the workshop to return and upgrade weapons when commanded. This means you can still manage upgrades when access to the workshop is blocked.

(3) Include active Followers in return all weapons [ *OFF | ON ]

(1) [ Open all actor inventories ] will open in sequence all player followers and local workshop assigned actors to find any other theaving. Companions (active and dismissed) are the WORST for grabbing and keeping extra weapons and ammo from corpses and containers during combat.

(2) When in an owned workshop location the [ Return all weapons/ammo & upgrade to best ] option will transfer any droppable base game/DLC weapon and ammo from organic humanoid (Human, Ghoul, Synth, Supermutant) workshop actors and player followers to the local workshop (if workshop access is allowed) or central stash (if a local activator is built). Actors that do not have a recognised weapon or have animations for regular weapons are excluded (Alien, Robots & etc). Supermutants can only use Pipe, Assault, Hunting and Minigun weapons.

(3) Companion actors are never included in the automatic upgrade process to avoid their undroppable/inventory invisible default weapon from being removed and lost forever.

(4) The active workshop monitor must be enabled enabled to unlok the following functions:

(5) Block weapons & ammo being taken. This will not help with actors scavenging wepons off the ground or looting corpses during combat, but Combat Settlers can manage that battlefield scavenging, fully compatible with this monitor for total loot coverage. If Combat Settlers is installed and its Mange Weapons function is enabled, this Take Weapons is LOCKED enabled/allowed.

(6) If not allowed to take weapons, still return excess ammo (because actors always take the whole stack) except the 1 round they actually need.

(7) If allowed to take weapons, warn if a legendary has been taken and optionally pop the actor inventory to retrieve it. This does not automatically return legendary weapons to avoid blocking loops where actors are allowed to upgrade weapons from the workshop, but keep trying to take the same highest value legendary that keeps getting returned.

(8) With update 002 if actors are not allowed to take weapons, Wastleand Justice can be enforced. Any workshop thief that is not a quest target, unique or a companion actor is kicked from the workshop, made mortal and hostile. Sort them out. Check the corpse for stolen loot to clear the holding marker so it can be cleaned up.

(1) The automatic [ Return all weapons/ammo … ] functions can occasionally trigger actors to reset to their default ActorBase outfit if you have equipped non standard clothes/armor. This outfit reset is a base game defect triggered by script functions RemoveItem(Weapon), AddItem(Weapon) and comically EquipItem(Armor) when trying to fix the issue by automatically re-equipping armor. Even the official high quality supported Creation Club content has this problem.

(2) Best weapon is defined in the priority order of FormList SKK_WAMWeaponListUpgrade which can be editied before a game starts, but not once a game is running as DLC weapons are automatically added to the top of the list which will be lost.

(3) This automatically includes most DLC weapons/ammo if installed, but clearly does not know about your mod added weapons/ammo. They can be added to SKK_WAMWeaponListUser and SKK_WAMAmmoListUser with xEdit at any time (best to save an an over-ride file) to be included in the main lists. Once added DO NOT REMOVE ENTRIES as this will corrupt the lists with NULL holes.

(4) Grenades and particularly mines are excluded from the weapons lists as they can cause problems with scripted interactions. If you are feeling lucky you can try adding them to SKK_WAMWeaponListUser and see what happens. Boom.

If [ Workshop Monitor Disable ] is set in the menu no scripts will be active so the mod can be disabled in the load order if you have removed any built weapons stash activators. Only remove mods if you are happy to accept potential conflicts from load order changes in a save game.

(1) But I can stop settlers taking my stuff with seperate non accessible/locked containers or keeping all my stuff in workshops with no settlers ! Absolutley if you actually enjoy that stuff micromanagement then keep on fiddling. Clearly this QOL solution was not created for you, try Fallout 76 which contains 101% maintenance grind and inventory micromanagement.

(2) But I am using your allegedly settler proof Global Stash ! When the player is building all the global stash inventory is transferred to the local workshop, so settlers CAN infact get their grubby little paws on your sweet sweet stuff if there is any combat whilst you are building.

(3) Why is there no ESL version ? Because life already contains sufficient hassle maintaining 50 scripted ESP solutions.

(4) Will this be merged the other mainstream SKK workshop/settler solutions like Workshop Ownership Utilities or Combat Settlers to reduce mod slots ? Possibly.

Update Notes: Update is totally transparent, can be installed in any savegame at any time.
New: Global settler weapons container used to get/put settler weapons if a local activator is built (Furniture/Containers) rather than using the local workshop.

Update Notes: Update is totally transparent, can be installed in any savegame at any time.
New: wasteland justice option to punish workshop thieves.

COVID in the Commonwealth from SKK
Scroll to top