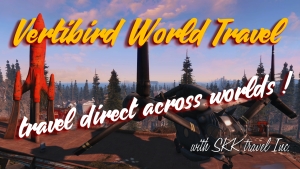 Convenient and sort of immersive

Install the mod at any time in any game to receive a regenerating [ .SKK Vertibird World Travel Menu ] activator in your AID inventory (after exiting the vault), which will pop a menu to configure:

Creates Vertibird World Travel (VWT) activators at the Nuka Transit Center, NukaTown carpark, Nakano Residence and Far Harbor docks that can be used to travel direct to any other activator or owned workshop.

Disable will remove all placed and workshop built VWT activators from the world, removes and stops generating the AID menu item. If you want to re-enable VWT, craft another menu item in Chemlab [Utility]. Yes you can disable and enable this stuff as much as you like.

Enable Vertibird Fast Travel (VFT) map travel is activated by special [ VWT Signal Grenades ]  which work in the Commonwealth, NukaWorld and Far Harbor for on map travel (the base game grenades do not). VWT signal grenades do not work in the Diamond City or Goodneighbor as there is nowhere to fly to.

This only enables the specific cross worldspace VWT grenades, not the regular base game ones. The enable state of this service does not affect the base game vertibird fast travel state which uses BoSFastTravelCanUse variable and VFT quest.

If VWT is also enabled, fast travel vertibirds will offer both [E] RIDE and [R] WORLD TRAVEL activation options. RIDE is the usual mount and use the map to choose a destination marker experience, WORLD TRAVEL pops the VWT menu.

Buildable VWT is activator to activator load screen travel in and

between worldspaces with the [E] WORLD TRAVEL option.

Grenade callable VFT is the regular map destination flight in any

Enable the Commonwealth to NukaWorld and Far Harbor fast travel map markers and their return to the Commonwealth markers if not already activated.  Not really needed with VWT & VFT active, but hey you get choices. This is a one way map add and enable, the map markers can not be disabled.

(4) Switch workshop travel between all owned or only those with VWT activators.

So the player can arrive in a vertibird rather than at the fast travel point for ‘mersuhn. Whilst interior workshops may be included on the list of owned workshops, selecting an interior workshop will be rejected because logic.

VWT flights are hidden behind a couple of seconds load screens, but game time will pass calculated at the normal Vertibird flight speed of 1,000 game units per second factored for the Timescale setting you have configured (for ‘mersive survival needs).

If you access the DLC worldspaces before doing the enabling quest stages, actors and quests in Far Harbor seem to be OK about it. You will not find Gage in Nuka World without completing the gauntlet or using a quest bypass mod (DLC04MQ01 Taken For A Ride)  to enable him.

The mod has no dependencies on extenders or DLCs and does not change any existing base game scripts or assets. That’s right it does not even to mess with the VFT story manager or quest. It also creates assets in the DLC world spaces without any hard dependency on the DLCs. Demonstrating that dependency and conflict free non invasive interventions are totally possible with some thought. I can also shit strawberry ice cream. Probably.

If the Fallout 4-76 integrated Vertibird World Travel function is detected enabled, a warning will pop offering to shut this mod down to avoid duplicate clutter.

(1) Nukaworld height maps do not allow for vertibird flights so you will fly through tall buildings and fizz top. You may want something like Nettoyeur’s Nuka World Vertibird Altitude Fix.

(2) VWT Activators can be crafted at isolated/player home workshops like Mobile Workshop in any external worldspace including DC and GoodN to travel from, but they can not be returned to as the list of owned workshops is generated by WorkshopParentScript which isolated workshops are not registered with (that’s what makes ’em isolated).

(1) Why is there no ESL version ? Because life already contains sufficient hassle.

(2) Why an aid item menu rather than MCM ? Because the amount of moaning about holotapes, and 90% of SKK mod users experience Fallout 4 on Xbox.

(3) Whats the point, there are already a crap load of personal/craftable vertibirds ? The specific problem this solves is direct travel between NukaWorld to Far Harbor using vertibirds. If you don’t need that, use something else.

(4) The 4 hours to fly 130 miles to Far Harbor doesn’t make sense. That’s right a dirty UH1 would do that flight from lift to landing in an hour real time, which at 20:1 would be 20 hours game time but that’s stupid. The warped world distortions do not allow linear time – speed – distance conversions from the real world, so its more a case of what “feels” right. I run timescale 6 and 40 minutes real time feels OK.

(5) Why doesn’t vertibird world travel fly all the way for mah ‘mershun ? Well Timmy, its like when I ask your mommy if lipstick is extra. I can make a vertibird fly to the edge of the map, cut to the new worldspace and then continue the flight to land (with orbit and hover options), but only 50% of the time. The game AI which controls vertibird actors will randomly throw a fit and start flying around underground or force land and sulk in a frenzy of compute cycles that tanks framerates from 60 to 20 for the rest of the game. I don’t work with actors that have inconsistent behavior issues , demand unreasonable resources or charge extra for liptstick.

With VWT and VFT set to disabled in the menu no objects are left in the world and no scripts run. If you are happy to accept potential conflicts from load order changes in a save game, then you can disable and remove this mod.

If you don’t want to use or favourite the [ .SKK Vertibird World Travel Menu ] aid item, use console commands in hotkeys.ini or MCM json things:

UPDATE NOTE: All updates so far are totally transparent, can be installed in any savegame at any time.
Change: VFT faction is updated for each grenade call.
Fix: menu item and grenades given to the player at each game load.

UPDATE NOTE: All updates so far are totally transparent, can be installed in any savegame at any time.
Change: Menu item has physics and falls to ground when dropped from inventory. Detail !
Aligns with initial Xbox release on bethesda.net

UPDATE NOTE: All updates so far are totally transparent, can be installed in any savegame at any time.
New: Player followers are moved more elegantly with the player during VWT
Fix: Workshop crafted VWT activator miniguns are removed when scrapping.

UPDATE NOTE: All updates so far are totally transparent, can be installed in any savegame at any time. This update removes all workshop Vertibird activators to add miniguns , they need to be rebuilt.
New: VWT Activators get a static minigun for visual fluff.
Fix: The perk which adds [R] WORLD TRAVEL menu option to VFT vertibird activation is not always applying to the player.
Fix: VWT lands player inside the destination vertibird.

UPDATE NOTE: All updates so far are totally transparent, can be installed in any savegame at any time.
Change: does not check and add an aid item at every game load incase you don’t want it in inventory.
Fix: Menu conditions for switching VFT Vertibird Fast Travel enable/disable
Change: VWT static vertibird activators get a static minigun