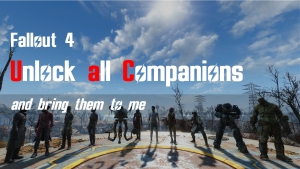 Make any and all 13 base game (and 3 dlc) companions available, and bring them to the player without having to complete any quests. Set default weapon, hostility and health management.

Make any and all 13 base game (and 3 dlc) companions available, and bring them to the player without having to complete any quests. Set default weapon, hostility and health management. This is for use with overhauls like Fallout 4-76 Open World as enabling some companions early will break the Main Quest or Faction quest lines.

Install at any point in any game and this mod provides a [.SKK Companion unlock Holotape] in MISC inventory after V111 exit which makes any selected base game companion available, and moves any/all enabled companions to the player.

Any companions that depend on a quest that has not been completed will pop a confirmation warning to avoid tears later. To see the quest line impact, lookup the listed quest in this Fallout 4 Quest Flowchart https://imgur.com/gallery/Rzg2p84

This will prevent the Main Quest progressing, OK ?

To enable Valentine without compromising the main quest use SKK Fast Reunions.

To speed up Danse without compromising BOS quests use SKK Fast BOS.

(1) Hold current companion will keep them in place with a map marker reminder even after fast travel or worldspace teleport. They are set to ghost state when held to avoid any unfortunate behavior. They must be released, even after using “move to me”.

(2) Move current companion or all available companions to the player.

(3) Highlight or Map Mark the current companion and all player followers.

(4) Open the current companion and all player follower inventories in sequence.

For each base game and DLC companion the unlock option changes depending on their state:

LOCKED | UNAVAILABLE = they are not installed (DLC), are already dead or disabled

MAKE AVAILABLE = they are not currently available, this will do the quest stuff to make them so.

AVAILABLE MOVE TO ME = They are avalable as a companion.

For each base game and DLC companion, show their affinity.

Hatred which blocks player rejoin (like Preston after DLC04 Home Sweet Home) can be reset to netural.

These settings apply to all base game and DLC companions regardles of state:

(1) Hold actor after moving to player stops them running off to their home locations straight after moving. It is released for combat, when they join the player as companion, or using the holotape release option.

(2)  Force equip default weapon stops the companion from unequipping their unlimited ammo default weapon and picking up junk (Curie, looking at you mamselle).

(4) Add player weapon perks adds the same perk levels that the player has: Gunslinger, Rifleman, Commano, Heavygunner, Bigleagues. They have a SIGNIFICANT impact on companion damage out.

(5) Unlimited ammo enables them to shoot any weapon with just one round like a “normal” NPC. Excludes Rocket Launcher and Fat Man.

(6) Switch Power Armor damage off to avoid broken pieces being lost in inventories or having to fish ’em out and repair. Switch back on if you love the gind.

(7) Switch ignore your friendly fire to stop them getting angry. Default game they do not ignore firendly fire so they will aggro the player if hit too many times, like when they walk straight across your sights. Again.

(8) If a companion turns hostile because you have been shooting them, or commit a crime, options to immediately pacify them or make mortal so they are killable. Whilst this works on the companion, if they are in a local shared crime faction like CrimeDiamondCity that alarm may have already alerted local NPCs.

(9) Level health to player will bump companions base heath to players base health on level up (if it is more than current).

(10.2) ESSENTIAL (unkillable). Either bleedout and automatically self-recover ~15 seconds, or need healing. With need healing they will use Stimpaks/RepairKits (if DLC01 installed) in inventory or the player must heal them. On the rare occasion that an OnEnterBleedout trigger event is missed by a script so no [ Apply Healing ] activation option appears, use the [ Recover ALL Bleedout ] option on the main menu.

(10.3) PROTECTED take damage, bleedout and automatically recover, but the player can kill them.

(10.4) MORTAL take damage from and killable by anyone.

(11) Fallout 4-76 protection adds the SKK_476NoDisable keyword to all available companions if that mod is installed. This only works for companions that have been made available with the setting applied BEFORE Fallout 4-76  has been enabled, else they have already been removed from the game.

(12) Apply settings to mod companions will apply the configuration settings 4 – 11 to any companion recruited to the base game Followers quest Companion slot. It will not know about multiple companions enabled by mods, they need to manage their own actors.

(1) Equip default weapon only works consistently for the current companion. If others are hanging around and combat starts, they may still grab whatever weapons are lying around.

(2) MacCready still needs to be hired for caps first time you talk, even mods are unable to bypass a merc’s need for hard cash (without hacking his quest scripts).

(3) Piper may on dismiss return to the Diamond City entrance start marker if you have not already run that scene with the mayor. Use the “move to me and hold actor” function.

(4) If Preston keeps running back to the Museum on dismiss, either use the “move to me and hold actor” function, or use Preston is killable by SKK to address the root cause.

(5) If X6 is enabled as a companion before Inst301 Synth Retention starts, he is automatically dismissed and setup for that quest when it starts. If he has inventory it is safe. You will be warned if you try to force him into companionship whilst that quest is running

The mod has no dependencies on extenders or DLCs and does not change any base game assets or objects, its 100% pure new Creation Kit forms and wrapper scripts. This mod should not be disabled or removed if any of the companion settings have been changed from default.

> Why is there no ESL version ? Because maintaining scripted mods already involves enough hassle.

> Why holotape rather than MCM ? Because 90% of SKK mod users are on Xbox which does not support F4SE and therefore MCM. Whatever I publish will always work on PC and Xbox because reasons.

If you prefer to use hotkeys, console commands or want to make an MCM json file:

Release Notes: This update is transparent, can be installed at any time but requires Fallout4.exe 1.10.162.0 (or later)
Change: Ability to dismiss companions to different locations removed as a simple CompanionActorScript property update causes all manner of other unwanted dirt to be attached to the actors. Companions dismissed to non workshop locations are sent to Sanctuary.

Release Notes: This update is transparent, can be installed at any time but requires Fallout4.exe 1.10.162.0 (or later)
Set current companion on dismiss to one of 10 non workshop home locations. REMOVED IN 010
Fix: forcing default weapon ignores dog as UnarmedDogmeat has issues.

Release Notes: This update is transparent, can be installed at any time.
New: holotape option to hold current companion in position even after player fast travel
Fix: added ComCurie quest watcher to shutdown when Friendship level affinity tries to trigger it again.

Danse on dismiss travels to CambridgePD to fight ghouls when released if Bos100fight is still active. Quest is stopped.

MacCready on dismiss travel package heads back to ThirdRail cleared. Existing games will be updated.

Unlock all companions at once to make available.

Preston is Killable by SKK