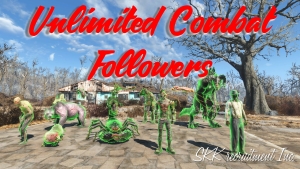 Recruit any actor as a follower with no limit on numbers until your game falls over. Switchable marking, health and recovery options. They suck at combat and don’t talk, just like rando BR team mates. Use for disposable meat shields, not waifus.

Lets be clear: Companions are actors with complex RPG dialog and affinity who suck at combat so dwess ’em up for romance. Followers are basic actors like those random BR team mates who don’t talk and also suck at combat. They are disposable meat shields, not waifus.

Install this non intrusive mod at any time in any game to give you an [ .SKK Unlimited Follower Configuration ] aid item anytime after waking up in Vault 111 cryo (or craft at chemlab). It makes no static changes to your game.

When recruiting is enabled the player is given a perk that adds a [R] Recruit Follower activate option to any compatible actor. Compatible actors are ANYTHING (human, robot, animal, creature) except:

(b) Actors  that can be detected being spawned by systems that manage and clean up their actors, so they are not held open waiting for the actor to die or unload.

If the actor is Unique or Essential they are likely to be a quest dependency so a warning pops to check you are happy to accept the risk of breaking something by recruiting them. Not saying that recruiting other actors wont break stuff, just reasonable endeavours.

If the system detects that it’s AI movement package is not being used, it will pop a warning and release the actor as it is clearly being held by another quest or script.

Hostile actors are pacified and made friendly/ally to the player companions and followers, even if they are in combat.

Their default AI settings are stored and set to: Helps Allies, Brave (flee if severely outmatched), Unaggressive (do not initiate combat),

If recruiting is set to [ One Time ] the perk is removed after each recruitment so needs to be enabled again in the configuration menu.

If the actor recovery is changed from default, all settings are stored and restored on dismiss or if default is set again.

(1) Mortal means dead is dead, so don’t use it and then complain.

(2) Protected only the player can kill them, otherwise they will bleedout self recover ~15 seconds.

(3) Bleedout & recover is like protected, but the player cant kill them. For players who’s aim is worse than Companions or like to spam ‘nades.

(4) If actors are set to “Bleedout need Stimpak” they are unkillable, and:

(4a) Managed Robots use Stimpaks unless DLC01 is installed for RepairKits.

(4b) Actors will self heal if they have a Stimpak/Repairkit in inventory.

(4c) Actors that need player Stimpak are map marked [ Follower needs Stimpak ] and offer [ Apply Healing ] activation. Some actors do not have bleedout animations so they stand around idle looking OK which is why map marking them is important.

Health scaling configures managed followers health to 100 + the configured value per player level, if that is more than the actors current base health value. Base game leveled actors typically add 5 health per player level. It is automatically updated whenever the player levels up and restored to original on dismiss.

When followers are not bleeding out they have a [ Follower Commands ] activation menu rather than the usual chitchat dialog tree.

When a follower is dismissed either from their command menu or the Dismiss All Followers configuration menu, they are totally released by this mod and all original Recovery – Health – AI configurations are restored.

If they are non hostile on dismiss and have WorkshopNPCScript they can be sent to a workshop, otherwise they will return to their default editor/spawn or where you recruited them location. What happens to them after that depends on whatever created them and their default or active AI package.

(1) * No limit. Actual limit is 128 including other companions and quest followers to avoid busting script array limits. Demand to see the manager for a full refund if this detail is disappointing to you, Karen.

(2) Add Activate. An object can only have one additional “Add Activate” option, but there is no mechanism to detect if one is already applied. If you have multiple mods adding activate functions to these objects (recruit, hold in place, quick trade … whatever) they will conflict so NOTHING IS ADDED or random activates are added which is why you NEED TO RTFM for every mod you choose install.

(3) Some actors will not follow the player as the high piority quest which created them will not release, so that quest AI package has priority.  This tried to detect that condtion to automatically boot those actors, others have to be dismissed with the menu.

The mod should not be removed from a save game as some of the perks it applies to the player are persistent for performance.

(2) Why another aid item rather than MCM ? Because 90% of SKK mod users shoot stuff on Xbox. Yes that’s right Timmy, for every 1 nexus PC download there are 9 Xbox downloads on Bethesda.net so they clearly appreciate my combat stuff.

(3) There are literally hundreds of follower mods, why another one ? Because they don’t meet my combat oriented needs. RPG Companions suck at combat and I don’t want MORE of their same old chitchat. I do need all friendly actors to either die or bleed out until recovered, otherwise combat is totally non challenging and pointless.

If another aid item in inventory triggers you, throw it away and use these console commands in hotkeys.ini or MCM json things: