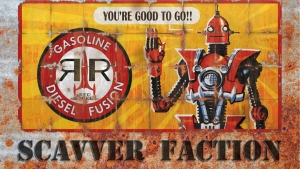 A Scavver faction owns and operates 4 new workshops at the fullsize Red Rockets (not the Dogmeat one), with patrols and outposts at the smaller RR locations.

This offers a new experience to figure out how to aquire a faction’s resources, which happens to include new workshops. It is not a new workshop settlement build area solution for clean ‘n tidy OCD perfectionists who want to build to the sky. If you already have that then stick with ’em.

If you enjoy exploring and figuring stuff out, skip the next bit which describes the faction, actors and workshops …

The Scavver faction starts friendly to the player to help in any fights. Theft or murder crimes against Scavver members and stuff will set the temporary 24 game hour faction hostility like any other friendly/neutral factions.

Shootin’ ‘n lootin’ to force ownership of Scavver workshops will obviously affect the faction relationship. With some legwork you may find an alternative path that avoids hostility, but if you are in a hurry or CBA with faction nonsense just shoot stuff up as per usual.

Scavver actors are a new levelNPC form and custom level lists which should not be affected by any other form based overhaul mods. The actors spawn leveled to the player when first loaded, with health calculated at around 100+5/player level which should be OK for most game balances.

The actors use scav related chatter and talking to them may well cough up interesting stuff if you have patience, but there is no tedious dialogue to arrow through. If you meet a scavenging patrol you can ask their route.

Scavvers do not respawn in workshop locations, if they loose ownership of a workshop the hostile way they will not trouble you again. Scavvers in non workshop outposts will respawn (see console settings) until the faction departs or disbands. If the faction looses ownership of all 4 main workshops in hostile circumstances, the Scavvers will probably leave the Commonwealth for a less difficult location. Maybe the Blue Ridge mountains of West Virginia.

Scavver actors have WorkshopNPC script so they can be settlers if you manage to ally with the Scavver faction. Using console/utilities to force recruit Scavvers before they are allied may deliver surprises, ho ho.

You can force ownership of the workshops the hostile way, or if you are willing to invest some effort there is a method to peacefully ally with the the Scavver faction, gain ownership of all workshops and keep the Scavvers as happy settlers.

The exterior workshops are fully configured and WorkshopParent registered for settlement production, but not the interior Glowing Sea one. Part of this faction experience is figuring out how to take ownership as the locals will notice and react by design if ownership is forced with utilities or console.

Roofs are fully navmeshed for NPCs. All non precombined objects are scrappable using an additional scrap list that only works at the 4 RR locations to avoid conflicting with your other scrap recipe mods. It can be totally disabled with console settings for total conflict immunity. No precombines have been broken for static scrapping as that kills performance, and regenerating cells massivley increases the conflict footprint.

There are optional fetch radiant mission opportunitues which regenerate every game day at each workshop. They do pay out caps and occasional unique stuff.

If you want a full quest/mission, this works really well and has intergration awareness with COVID in the Commonwealth. Cough cough.

There are some unique items to collect for those that enjoy collecting stuff which can trigger unique outcomes and be displayed on a craftable stand.

What is the Scavver Map for ? Lazy players.

What are the unique Scavver Magazines for ? Paying attention (your Methylphenidate may help).

What are the common Scavver Magazines for ? 1 cap or 1 cloth each or just drop them and see.

All new assets are scrappable so no new crap high quality content like posters will persist in the build areas. Some of the new stuff can also be crafted under Decorations/Scavver. Use console settings to hide the Scavver crafting menu if your adverse to more clutter.

(1) Armor worn with Scavver Underalls clips and merges which is totally intended as it suits the scruffy scavvers. If such messyness affects your ‘mershun or other conditions then hack the SKK_RRScavver* level lists to dwess em up in ways that make you less anxious.

(2) Scavvers as ally/settlers can not be workshop vendors as their scav chatter will always over-ride vendor dialog. Use normal recruited/relocated WorkshopNPCs.

(3) Workshop build areas all contain unscrappable precombined objects. This is a faction experience, not Lego.

(4) If you are still doing base game quests, when you chat with Ricky in Tradecraft, the Lexington scavver outpost turret may engage in a shootout with an institute turret in the diner. No harm, just extra ambiance.

The mod has no dependencies on extenders or DLCs, but it does make some changes to base game material which could conflict:

(A) This is fully compatible with any and all SKK mods (for example, but not limited to) Fallout 4-76, COVID in the Commonwealth, Combat Stalkers/Settlers/Attacks/Whatever. Remember that forcing ownership even with super high quality SKK solutions *will* be detected and responded to as scavvers have been specifically coded to offer no free lunches.

(B) Any workshop will conflict with any other workshop if workshop tagged locations or build areas overlap. No, not just this mod but ANY workshop mod at all ever and there is no such thing as patching for those core platform mechanics. A cell can only belong to one location and a location can only be assigned to one workshop else you will corrupt the WorkshopParentScript arrays. Use Workshop Ownership Utilities to validate the integrity of your WorkshopParentScript arrays before and after installing new workshops.

(C) What (b) means is that if you already have workshops at any of these Red Rocket locations you can not use this solution. There are no patching or xEdit hacking solution so don’t bother asking. You would be better off asking whoever made your chosen Red Rocket workshop soluton to add their own faction content or something.

This can be installed at any time in any game as long as: no other workshops overlap the cell locations and you have not already corrupted the WorkshopParentScript arrays with bad workshop installs/removes.

This solution registers new workshops with the WorkshopParentScript arrays. REMOVING ANY DLC or MOD THAT REGISTERS WORKSHOPS FROM A SAVEGAME WILL CORRUPT YOUR WORKSHOP SYSTEM. You know this, so no tears or whining.

(1) Does this have anything to do with Sim Settlements ? No, this is totally standalone.

(2) Why is there no ESL version ? Because life already contains sufficient hassle maintaining 50 scripted ESP solutions.

(3) Will you make the workshop idles available standalone ? No.

COVID in the Commonwealth from SKK