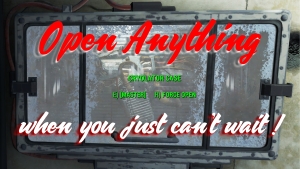 A ring of power that can force unlock nearly any door, container or terminal, play animations for vault doors and security gates, enable blocked elevators and card readers. Work around broken quests, or just open the world up without quests or actor chitchat.

Install this non intrusive mod at any time in any game to give you an [.SKK Open Anything Ring] after waking up in Vault 111 cryo. It makes no static changes to your game until it is worn to add additional activation menu options:

(b)  [ FORCE ANIMATION ] to common objects with open animations that can get stuck in quests such as Vault doors, DC Main Gate, Railroad puzzle, Castle Armory or Security Doors.

(c) [ ENABLE ELEVATOR ] to elevator call buttons that use the standard ElevatorMasterScript.

(d) [ BYPASS READER ] to ID card readers that use the standard IDCardReaderScript.

Take off the ring to stop the additional activation menus appearing on objects.

Craft a replacement at the chemlab under [Utility].

Other BASE FORMS (not ObjectReferences) with open animations using “Open” or “Stage2” can be added with xEdit to form list SKK_OAUserObjects. The next time the game loads, the [ FORCE ANIMATION ] option will appear when the ring is worn.

If you want to hotkey enable/disable the function rather than use the ring, the console command strings:

(1) Any associated quests, triggers or scripts are not managed. This is a brute force method to open stuff bypassing broken quests, or to provide quick OpenWorld(TM) access.

(2) This will not solve problems with doors that have blockers or object swaps which depend on undetectable “enable state parent” triggers such Fort Hagen door blocker, Vault 81 secret panel, OldRobotics door. They need a fully managed OpenWorld(TM) solution like Fallout 4-76 Open World which does open all of that up.

(3) This uses the “Add Activate” perk function for the additional activation menu options. An object can only have one additional “Add Activate” option, but mods can not detect if one is already applied. If you have multiple mods adding activate functions to these objects (quick loot, lock, scrap … whatever) they will conflict so NOTHING IS ADDED which is why you NEED TO RTFM for every mod you choose install.

(4) Do not run away or fast travel while animations are playing, that can cause all sorts of problems on long running sequences like vault doors.

(5) If you find something it will not open, post the ObjectReference and location on the nexusmods.com discussion thread.

The mod has no dependencies on extenders or DLCs and does not change any existing base game scripts, assets or objects. It is 100% pure new Creation Kit forms and scripts which means that it has no load order dependencies (load order will not fix multiple “add activate” object menu contention).

The mod can be disabled as long as the [ .SKK Open Anything Ring ] ring is not worn or in inventory. Best to scrap any instances of it. Only remove mods if you are happy to accept potential conflicts from load order changes in a save game.

(2) I can do all of this with console commands. Yes, but not on Xbox which 90% of SKK mod consumers use, the world is made of more than just you and your PC.

(3) Why a ring ? Proved to be the quick and easy way to enable/disable player bypass functions when they are only wanted for specific objects rather than faffing about with holotapes or consumable chems. MCM does not of course work on Xbox.

UPDATE NOTES: All updates so far are additive, do not affect the current game so fine to update in place at any time.
New: added RRSecretDoorBrick01