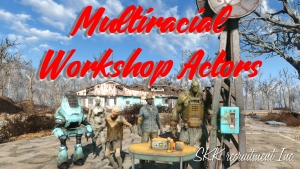 Multiracial Workshop Actors recruits Alien | Brahmin | Feral | Gutsy | Handy | Human Settler | Protectron | Synth | Supermutant | Triggerman | DLC04 Raider as workshop settlers who produce resources and annoy you with hellos and idle comments. Use beacons over time to recruit to the free bed count, or a radio for on demand spawning.

Add some racial diversity to your population

(1) Multiracial Recruitment Radio (Resources:Misc) which needs no power to spawn your choice of race (or random) on demand from an activation menu, up to a limit of 127 actors per workshop.

(2) Multiracial Recruitment Beacon (Power:Misc) needs power like a regular beacon to attract your choice of race (or random) from an activation menu at the configured game hours interval up to the workshop bed count. New beacon recruits will only turn up (or over population dismissed) when the player is on site so workshop objects are loaded and counters are correct.

When either radio or beacon are activated a menu pops to select the race and configure options:

[ Give me an SKK Actor Management Note ]

Other races are all custom lvlActors which are WorkshopNPCScript enabled for any production task or provisioner assignment and can be sent to other workshops. Your actor overhauls will probably not apply unless they work at the race level. By default they all can be assigned to and produce resources (but mostly do not have production idle animations), so count for population needing food, water and a bed (except robots).

DLC04 Outposts: DLC04 raiders can only be recruited to DLC04 Outposts where the correct faction is automatically chosen. Any other race can be added to DLC04 Raider Outposts. If the player is kicked out of that outpost faction, the MWA actors stay friendly to both the raider factions and the player so will be neutral in any takeover fight. This could be confusing if they are made a follower and visit other hostile raider outposts.

To avoid aggro with neutral actors, all custom actors have been pacified for less aggression (AI aggression = 1) like normal boring settlers. Otherwise ferals in Sanctuary attack Carla which is racially sound, but may be inconvenient for RPG.

Any actor setting changes to recovery/health only apply to new spawned actors going forward. They are not retrospectively applied to existing actors to avoid holding on to them and contention with proper full-fat workshop actor or settler configuration managers.

Recovery: Default base game settlers are Protected which means they can take damage from anyone, bleedout for ~15 seconds and self recover, only the player can kill them. Mortal means killable with no comebacks, so don’t use that and then complain Karen. If you want to switch your settlers between recovery options or bleedout and need healing for immursion, use Combat Settlers to manage that.

Health: Default base game settlers have a flat 100/110 health which is never updated. This can spawn actors with health scaled to the player at that time but does not update. If you want settlers to scale health with the player levels, use Combat Settlers to dynamically manage that … getting that hint yet ?

Irritating Chatter: Actors have default dialogue to trade with the player and also offer irritating hellos and idle comments. Switching chatter in the menu applies to all existing actors in real time. Except Ferals, they refuse to talk. As the races don’t have animations for workshop resources or idles they mostly wander around saying stupid things. Just like real settlers when your ResetWorkshop script is broken.

If there are too many settlers the beacon will try to dismiss actors that are not dismissed companions, unique or assigned to work objects. To unassign actors from work objects so they can be dismissed, either destroy their work objects (storing will not unassign them) or trade the SKK Actor Management Note which has an option to unassign from work objects. Dismissal deletes the actor when they unload.

Top Tip: To change settings without having to switch the beacon off/on (which resets the recruitment timer), use the spawn radio menu.

SKK Actor Management Note can be generated from the spawn menu or Chemlab [Utility] section. When given to an actor that has WorkshopNPCScript it offers a context sensitive action menu:

(1) Most multiracial actors do not have idle animations for workshop work objects (farming, guarding, scavenge station). Rather than standing frozen in place they are configured to wander around looking busy. Calling with the bell can cause them to stop updating AI movement packages after being called until they are commanded or unload.

(2) For Gutsy and Handy actors to play a farming idle animation when assigned to flora use Idle Handy Farmers by SKK.

(3) If a workshop does not have at least one base game voiced WorkshopNPC in residence to act as “quest settlement spokesperson” it is unlikely to be picked by story manager as a radiant quest target.

As this mod was published after November 2019 it depends on Fallout4.exe 1.10.162.0 (or later). Get fresh and stop living in the past with aged content.

Actors spawned by this can be;

As this introduces new lvlActors and workshop objects into the game it is not a good idea to try and remove it. But, if your feeling particularly lucky,  kill – disable – delete all multiracial workshop actors, destroy all beacons/radios so no mod specific objects are active in your game then disable the mod and see if the savegame crashes. You must be really desperate or mad.

UPDATE NOTE: Transparent update, can be installed at any time.
New: Workshop Gutsy
Change: AI package conditions only apply if actor is assigned to a workshop. So actors can be dismissed and manged by other packages.

UPDATE NOTE: Transparent update, can be installed at any time.
New: Workshop aliens.

UPDATE NOTE: Transparent update, can be installed at any time.
New Workshop Triggermen (go camping)
New: SKK Workshop Actor Note pops a menu of commands (power armor, unassign, remove, reset).
New: Settings sub menu for actor and spawn settings options.
New: Menu option to set beacon recruit period (24 game hours, 12 game hours, all at once)
New: Switching on a Multiracial Recruitment Beacon will switch off any base game recruitment beacons and SKK Population Managers at that workshop.
Change: Radio and Beacon constructible object limited to one per workshop to avoid contention and race conditions.
Change: All actors (except human WorkshopNPC) can be recruited to a DLC04 raider outpost.
Change: Ferals do not use workshop packages to keep them wandering.

SKK Replace Any Actor with Any Actor
Scroll to top