spawns where you want 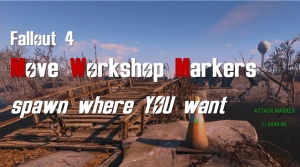 [ spawns where YOU want them ]

Install this mod at any time in any game, then after leaving Vault 111 the player is given a [ .SKK Move Workshop Markers ] menu activation item in AID inventory (craft spare at the Chemlab). When activated it pops a menu:

The [ Load Markers ] option will find the closest workshop in the active uGrids which must have a WorkshopLinkCenter marker (some mod workshops don’t), otherwise you get a warning and nothing else happens.

also known as LocationCenterMarker is hard linked to the workshop location as a Location Reference Type, identified with a Mr Handy box titled CENTER.

It is used by radiant quests for conditional Workshop picks, as a target by many AI travel (Provisioners, Patrols, Attacks) and sandbox (Settlers) packages and other game mechanics.

A warning and option to cancel is displayed if you try to drop the marker outside of the workshop location tagged cells. Once you have moved it, set the proxy object to locked so an actor cant move it through collision. Use this function TOTALLY AT YOUR OWN RISK if you absolutely must build over or wall in this marker.

if there is no separate WorkshopLinkSpawn marker (e.g. Sanctuary) a new one will be placed by the center marker so it can be moved. This is identified with an [E] grabbable/movable Traffic Cone titled SPAWN.

There is no common standard for even base game processes to use Workshop spawning markers. Some new settler recruitment uses WorkshopLinkSpawn and some use WorkshopLinkAttackMarker (via LocationEdgeMarker ref type). A technical mess.

also known as LocationEdgeMarker. If there is no WorkshopLinkAttackMarker (e.g. Airport) a new one will be placed by the player so it can be moved. That or any existing markers are identified with an [E] grabbable/movable Traffic Cone titled ATTACK.

More new attack markers can be created at the player and moved around. The various spawning systems which use these markers will generally pick randomly from the inventory.

Some base game workshop or settlement attack quests use WorkshopLinkAttackMarkers some LocationEdgeMarkers and others even try WorkshopLinkSpawn. As many of the attack systems look exactly the same, this generates plenty of confusion for mod creators and players. For the complete list of workshop markers and what they do, read the article SKK Workshop Utilities – Workshop Keyword Test https://www.nexusmods.com/fallout4/articles/2094 and refer to the Workshop Keyword Checklist table.

Of course mods do whatever they do depending on the authors knowledge and sophistication as there are no firm standards to follow. This mod was created specifically to help make SKK Settlement Attack System which uses the base game workshop radiant attack standard WorkshopLinkAttackMarkers more interesting.

Most base game workshop settlements have a default destination marker for trade caravans, like Carla at Sanctuary, which if built over confuses the AI travel packages. This is identified with an [E] grabbable/movable Shopping trolley titled CARAVAN. Location restrictions are unknown, but once a caravan trade post is built (unlock with [ SetStage FFBunkerHill03 500 ]) this marker is ignored.

(1) All markers are map marked to help you find them.

(2) Move or place anywhere that has good navmesh and good access paths for AI to detect. Avoid rocks, water and such else actors will get stuck. If there is no path, the completionist AI will try to teleport (actually MoveTo) direct to the destination.

(3) Probably best to keep markers within 10K game units of the workshop so new actors have a good chance of spawning with 3d loaded when the player is on site. AI packages can get stuck (as if on rocks) if the actor spawns with 3d unloaded.

(4) The cone/box/trolley proxy markers have physics so the player can grab and move them out of workshop mode, but other actors can collide to move them, or if placed on water they will sail away*. The actual invisible workshop marker they are linked to is only moved to follow the cone when the actual player grabs and drops them, so you may see discrepancies between the map marker on the actual invisible spawn marker and its traffic cone proxy which is floating down the Orinoco Charles.

This does not allow markers placed in the Creation Kit to be deleted as they are (should be) statically bound to cell locations which can cause all sorts of issues if removed. Deleting any base game object is just bad, mmmaky ?

When your finished run [ Unload markers ] from the menu. If you forget, after 15 minutes of inactivity the current workshop marker selections are automatically unloaded.

Update 005 offers an option to create a log file (on PC only) when markers unload that can be used to create console .bat files in other savegames when you have perfect marker positions. You may need to enable debug logging. Look in …\Documents\My Games\Fallout4\Logs\Script\User (or wherever your mod manager moves stuff) for SKK_MoveWorkshopMarkers*.log files.

The mod has no dependencies on extenders or DLCs and does not change any existing base game scripts, assets or objects. As with 99% of SKK mods, its 100% pure new Creation Kit forms and scripts. As it does not touch any other stuff in your save-game, there will be no load order issues or mod conflicts.

(2) What about MCM ? NO, as 90% of SKK mod users are Xbox. If one more wafer-thin inventory item triggers your OCD distress, use the console or hotkeys.ini to pop the menu with [ cqf SKK_MWM “SKK_MWMQuestScript.MainMenu” ]

(3) If this mod is not finding markers in your game, it’s totally your call whether to trust that this fully documented solution and associated articles knows what it is doing, or the undocumented xEdit hack-O-rama that tried to follow an incoherent monkey-see-monkey do youtube video and has actually fucked up your workshop, keywords and markers. Please do feel free to bitch at me about your less good choices so I can block your dumb ass from SKK content in perpetuity. Man, that feels sooooo fucking good to say.

(4) With thanks to @pepperman35 for adding grabbable physics to the Mr Handy box for a movable LocationCenterMarker proxy.

The mod can be disabled if markers are not loaded as no scripts run, it sleeps. Any marker moves and new markers will be persistent. Only remove mods if you are happy to accept potential conflicts from load order changes in a save game.

TRANSPARENT UPDATE at any time. Requires Fallout4.exe 1.10.162.0 (or later).
New: Unload markers creates a logfile with marker positions that can be used as a console bat file in other games.
New: Warning if LocationCenterMarker is moved outside of workshop location tagged cells.

TRANSPARENT UPDATE at any time. Requires Fallout4.exe 1.10.162.0 (or later).
New: Adds a moveable shopping trolley marker for the default CaravanDestinationRefType.

TRANSPARENT UPDATE at any time. Yes updating mods that document safe updates in a savegame is fine, no magic involved.
New: Remove created markers
Change: Do not need to be in a workshop build area to load markers for nearest workshop.