one bullet, one kill 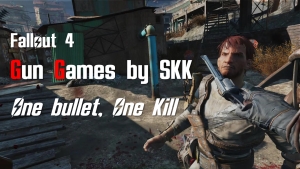 Take time out of RPG to practice your combat skills. This game within a game converts Diamond City into a temporary combat arena so you can put on your sweaty gaming sox and compete with hostiles for kill-death ratios, then restore back to normal to continue your role play.

One bullet one kill ~ One in the chamber

This can be installed at any time in any game so after leaving Vault 111 the player is given a never ending [ .SKK Gun Games ] menu activation item in AID inventory (craft spare at the Chemlab). Whilst idle this mod makes zero changes to your game. When activated in Diamond City a menu offers to start the games.

Converting DC to an arena

When a game starts all 50+ actors in Diamond City, along with the player companion/followers are moved to a safe location and all doors are disabled/boarded up. This is scripted, no hard edits to your game world at all.

When a game is stopped, any hostiles and boarded up doors disappear, the player’s companion and stuff is all returned along with the Diamond City residents, back to RPG business as usual.

One Bullet One Kill game

This first “One bullet one kill” game is based on a fave Call of Duty “One in the Chamber” gun game which gives the player one bullet to make each kill against free for all hostiles with the same equipment, or get bashing to earn the next round. Yes you will die a lot, but a PlayerUndead(TM) service recovers you to normal, all stats intact.

6 to 10 random humanoid hostiles are spawned. All participants have their weapons, ammo and Stimpaks removed to be stored securely and health is set to 100 (yes, including player).  Spawned hostile combat ability is tuned to the players current kill/death ratio (v002).

Everyone gets a  modified .44 and one round of custom .44 semi-hitscan ammo. The .44 deals 65,536 ranged and bash damage to level armor and perks for a one stop drop with an effective range from 0 to 4096 game units, after which damage drops off to zero. You also get a backup set of 65,536 damage knuckles as NPC actors don’t like to melee/bash using empty shooters.

A successful ranged or melee kill magics another round of ammo into inventory, but it must be manually reloaded. Corpses are of course cleared of unused ammo.  If you miss the shot, bash your way to another round, you will see plenty of that action.

When the player is put into bleedout they respawn at a random marker.  Hostiles keep respawning until lives run out in a life limited game, or the game is cancelled at any time with the [ .SKK Gun Games ] aid menu activation item.

VATS and Fast Travel are disabled during the game as they are not first person shooter mechanics, just learn to shoot straight rookie.

The CreationEngine/Gamebrio open world quest based RPG game engine is not structured to provide arcade shooter response rates. It’s good at what it does, but real time response rates are not it. Even juiced up to 72 fps your not going to flick corners or drop shot.

To make this feel more like a first person shooter, slide the HUD opacity to zero to hide the distracting on screen RPG clutter and amp your situational awareness.

Oh, and just for fun, try a full sprint cornering jumpshot and notice how you change trajectory when you slew the view in the air. That ain’t no physics we ever studied.  But, we love the Fallout world for what it does do, so its amusing to just mess about with it.

The mod has no dependencies on extenders or DLCs and does not change any existing base game scripts, assets or objects. As with 99% of SKK mods, its 100% pure new Creation Kit forms and scripts. As it does not touch any other stuff in your save-game, there should be no load order issues or mod conflicts, EXCEPTING:

(1) This is unlikely to be compatible with other solutions that make the player undead, unkillable, or manage bleedout so don’t do it unless those mods have an OFF switch.

(2) Multiple companion or follower mods may have problems with their managed actors being moved to a holding cell with AI disabled. You will need to dismiss them manually before starting a gun game.

(3) Whilst this mod makes ZERO permanent changes to the base game world, any changes made by other mods to markers or doors in Diamond City may cause conflicts when this mod tries to manage them.

(4) This mod is fully compatible with all DirectX aimbots, wallhax and lagcomp cheats you normally use in online competitive shooters. Don’t stop just because it’s single player, you can still brag about pwning those NPC actor bots an a 30-0 nuclear kill streak* !

(*) ps I know your cheating, because I am already cheating in the scripts 😉

(1) For online ability matched games 1:1 is the game designer’s target kill-death ratio, else your mismatched in the wrong lobby. Hurrah for Skill Based Match Making (SBMM).

(2) If the base game spawns in a Diamond City NPC actor whilst a GunGame is running, the hostiles are set to be friendly to them. If any are accidentally killed and you care about them, best to not save that game. Reload when you are done.

(3) What about an ESL version ? NO, SKK mods will not be published in ESL format because life contains sufficient hassle.

Copy  SKKGunGames.esp and SKKGunGames  – Main.ba2 to your …\Fallout 4\Data directory, enable in the Bethesda mod menu, mod manger or whatever.

The mod can be disabled if a Gun Game is not active as no scripts run, it sleeps. Only remove mods if you are happy to accept potential conflicts from load order changes in a save game.

IN DEVELOPMENT
Add double protection so hostiles ignore SettlementDiamondCity faction members if they are spawned by a base game process during a GunGame.

TRANSPARENT UPDATE at any time
Fix: Sneak re-enabled with a fix for stuck crouching postures after player bleedout.

SKK Replace Any Actor with Any Actor