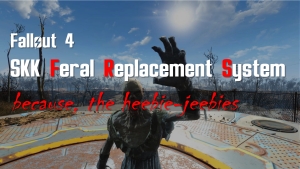 Dynamically replace ferals with different actors to freshen up engagements for new experiences as you wander the Commonwealth.

Install this mod at any point in any game to receive a [.SKK Feral Replacement System Holotape] in MISC inventory after V111 exit. This makes no changes to your game until you enable in the holotape option:

Replace corpses with [ *Nothing – Corpses – Live ]

All options are dynamic and can be changed at any time for instant gratification.

As you probably know exactly what will happen in most engagements, this will help freshen up for new experiences. It is a proven system from Fallout 4-76 Open World that dynamically removes and replaces all humans in the world.

Why pick on Ferals ?

They are handy as the race is distinct for fast detection and there is only one significant quest that depends on them: BOS100 [Fire Support], which this mod manages to completion, along with MinRecruit07 [Ghoul Problem at <Location>]. The reason why base game quests are an issue is that wrapping those quests without hacking the base game in any way took 4 times as long to produce as the rest of this mod. Ensuring there is zero impact on any base game quest lines gives you the CHOICE to progress them if you want.

As the player moves through the world (or telports between world spaces) at each cell boundary this mod scans for actors with the keyword ActorTypeFeralGhoul within the active uGridsToLoad (default 10K) radius around the player. It removes what it finds from the world and optionally replaces them with different actors.

If the original actor was static placed in the game, dead replacements can be configured to respawn after a configurable Game Hours time. This will dynamically apply the replacment faction and corpse settings at the time reset triggers. This only works for actors replaced with v005 onwards, FRS versions before that have not placed the respawn trigger markers.

The mod has no dependencies on extenders or DLCs and does not change any existing base game scripts, assets or objects. As with 99% of SKK mods, its 100% pure new Creation Kit forms and scripts. As it does not touch any other stuff in your save-game, there should be no load order issues or mod conflicts.

Do not run this with mods that are set to actively GENERATE large volumes of ferals unless you really want to stress test the scripting system:

SKK Settlement Attack System will detect this mod is removing ferals and not spawn them.

SKK Random Encounter Manager will detect this mod and is removing feals and not spawn them.

SKK Combat Stalkers may spawn ferals, but max 8 at any time which is not a problem. If they spawn too close this system may not have time to remove them though (see FAQ#4)

Fallout 4-76 do not configure to replace humans with ferals (use any option except ferals).

(1) Do not enable [ Nothing ]  replacements when running the vault 88 quest as a feral has a control board quest item which will disappear.

(2) Replacing feral corpses with other corpses is an intensive activity and likely to generate script lag, replacing them with LIVE actors is fine. No, really as the corpses are spawned live and have to be killed out of sight then the corpses moved into the world. The option to replace corpses with other corpses is only included to pacify the immersion fascists and exact coffee cup counteristas*.

(3) If random replacements are configured, some mob packs can be converted to a mix of different faction actors as they may be detected in different sweeps. Replacement actors are configured to be pals and not fight each other to ensure the player gets to do that work, so no bitching that Gunners are being chummy with Mutants and such.

(4) If a script or trigger spawns a Feral within the detection radius (yes some SKK spawning mods do this) this mod will not have time to detect and remove it. This is also an issue for feral ambush triggers. If you see any ferals with this mod enabled, they must be the ultimate alpha survivors and worthy of your attention.

(5) This finds ferals by the keyword ActorTypeFeralGhoul which is attached to all actors based on the feral race. If you use feral overhauls or replaces that do not conform to that base game standard, those actors may LOOK like ferals but they are not based on the feral race, so this mod will not be able to find them. Have a word with those authors about standards, compatibility and stuff.

(6) Can this mod replace other actors ? Technically anything can be replaced with anything, but is it practical and does the experience deliver lasting interest ? Replacing Deathclaws with Sofas is amusing for 60 seconds on 01 April  but that would take a week of engineering for a quality solution to wrap affected quests. How do you kill the sofa that pops up in Concord to progress When Freedom Calls ? Not worth it. Replacing bugs or creatures is a frequent ask, but there is no common identifier to find them, so it is slow, and any number of quest dependencies need tracking down and handling which is weeks or possibly months of work. Not worth it.

(7) What about an ESL version ? NO, SKK mods will not be published in ESL format because life contains sufficient hassle.

The mod can be disabled if the holotape DISABLE setting is submitted then no scripts run, it sleeps. Only remove mods if you are happy to accept potential conflicts from load order changes in a save game.

If you don’t want to use the holotape you can use these console commands in hotkeys.ini or MCM json things:

UPDATE NOTE: Holotape disable and save game before updating to ensure the scripts are idle for this update.
Fix: Error if replace corpses is not enabled live actors are not replaced.