the nights are dark and full of ferals 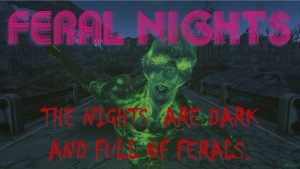 THE NIGHTS ARE DARK AND FULL OF FERALS. If the player is not safe at a defended workshop during the night, large packs of feral ghoul hunters will chase the player from dusk ’till dawn.

THE NIGHTS ARE DARK AND FULL OF FERALS

During the 10 hours of darkness between 8 pm to 6 am, if the player is not in owned workshop build area that has a defense rating, there is an increasing chance throughout the night that a large pack of feral ghouls will chase the player.

The player is given an [.SKK Feral Nights Holotape] anytime after Vault 111 exit to adjust settings and start the timers. Craft missing or spares at Chemlab/Utility.

Spawn in interiors [ *On | Off ] excludes small interiors.

Spawn in worldspaces [ *On | Off ] to protect Diamond City, GoodNeighbor, Nuka Market traders.

Innocent actor protection [ Off | *On ] so feral hunters ignore everyone except the player and team mates.

Warnings [ Off | *On ] to show or hide day/night reminders and a spawn warning beep.

If the holotape does not offer the specific values you need, use the console to set any value you want.

An optional [ Feral Boss Proximity Detector ] can be crafted at Chemlab/Utility. Equip in the grenade slot for audible range warning on an active pack boss. If you are travelling at night with difficult settings you really Really REALLY want one of these equipped.

By default ferals spawn regardless if the player is in an interior, scene, combat, crafting, sleeping, waiting. ANYWHERE. Except at a safe workshop, in small interiors or flying in a Vertibird. It is supposed to be punishing, like snakes on a ‘plane.

Using the holotape to [ >>> SUBMIT ] changes (or call the SwitchEnabled function from console) will cleanup any active spawn and reset spawn test timers.

Whilst most SKK spawning mods use real time intervals for finer control, to simplify day/night calculations this uses game hours. At default 20:1 Timescale, one game hour is only 3 real minutes. If you run low Timescale settings you may want to use lower game hour intervals for action.

Even with no other actors to manage, the game engine can not manage to path more than 32 actors with AI movement packages that track a moving target like the player. Any more actors just get left behind, so that is a hard cap for this solution no matter how much hardware, memory or script extenders you have. The limit is processing TIME.

The solution detects the number of live actors in the active area to either cap spawn count or skip spawning if the game has to manage more than [ Live Actors Loaded Cap ]. The downtown areas most affected (until they are cleared between cell resets):

If the player manages to run far enough away from a live pack that they unload 3d (around 15,000 game units) they are cleaned up to (a) reward that tactic and (b) fix actors that have spawned stuck on roofs & such, (c) avoid spawn bloat so the test timer can restart. Trying to get away by fast travel or hopping through a load door … see what happens 😉

With the volume of actors this spawns, the number of legendaries generated in survival is insane so ChanceLegendary is temporarily set to zero during actor spawning to help reduce that cheesing. Although occasional legendaries still manage to spawn, no idea how that happens with a zero chance set.

Innocent actor protection is not 100% effective. Some existing world actors are set to Very Aggressive hostility or have “Aggro Radius” enabled on their AI, both of which cause them to engage neutral actors like feral hunters. D-OH !

If you are serious about non OP experiences and running away or maintaining separation is a tactic, it would be best to not use companions as their AI does not understand those options so they stand and engage to be mobbed to bleedout/death. The SKK philosophy is that any game the player can just tank trough and does not need to run away from is not worth playing (and why Frog Legs is now in Fallout 4).

Feral actors are standard base game LvlFeralGhoulGlowingOne boss and LvlFeralGhoul followers. They can be swapped out for other actors by xEditing FormList SKK_FeralNightsActors. Index 0 is the boss which is spawned once, index 1 is for all other followers that make up the numbers. Do not add more actors.

This can be installed at any time in any game, it does not need a new game if your save is stable (ho, ho, ho).

(1) DO NOT USE THIS if you are using a solution that replaces ferals, such as SKK Feral Replacement System or Replace Any Actor. That would be beyond stupid.

Copy SKKFeralNights.esp and  SKKFeralNights – Main.BA2 to your …\Fallout 4\Data directory and add to Plugins.txt, or enable in the Bethesda mod menu, use a mod manger or however you organise. When the mod is disabled in the holotape and the detector is unequipped it is totally inactive with no scripts running. Only remove mods if you are happy to accept potential conflicts from load order changes in a save game.

(1) Why is there no ESL version ? Because life already contains sufficient hassle maintaining 50 scripted ESP solutions.

(2) Is this just a dumbed down Combat Stalkers that just renames ferals to hunters at night ? No totally not. Combat Stalkers is a scalpel that delivers an elegant combat experience with a maximum of 8 ~ 16 actors (whilst consuming the minimum script time possible). Feral nights is supposed to be blunt trauma kick in the head with 32 ferals chasing the player at top speed (whilst consuming the minimum script time possible).

(3) Is this compatible with X, Y or Z ? If its an SKK mod that does not replace ferals then YES, else I have no idea. As it makes no changes to anything it should not conflict, but if you have concerns then you need to test them.

set SKK_FeralNightsSpawningEnabled to 1
; [0|1] to disable/enable spawning.

set SKK_FeralNightsSpawnTimerGameHours to 3
; [-1 | 0.1 to 9] how often to check for ferals at night. -1 is random, over 9 hours will never complete during the night.

set SKK_FeralNightsSpawnChanceIncrement to 10
; [-1 | 0 to 100] as a percent value added to the base for every failed random roll on timer. -1 is random.

set SKK_FeralNightsInnocentProtection to 1
; [0|1] disable/enable feral hunters ignoring everyone except the player and team mates.

set SKK_FeralNightsWorkshopSafeDefense to 10
; [0 to 999] minimum value to qualify an owned workshop as safe from ferals.

set SKK_FeralNightsWorkshopSafeRadius to 4096
; [0 to 10240] maximum game units distance from a qualifying workshop to be safe in larger build areas.

set SKK_FeralNightsDisableLegendary to 1
; [0|1] disable/enable legendary actor spawns (not 100% effective, so call it reduce).

UPDATE NOTES: this update is transparent, can install in an active savegame.
New: Daylight despawn holotape option (default to despawn and cleanup at dawn).