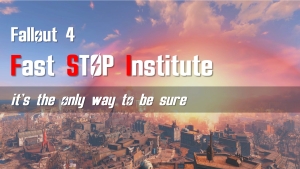 Do you want to blow the institute without messing about with the main quest, factions and relays ? Now you can, at any time in any game stage with no factions required. Instant gratification with a remote transmitter, or run a lore friendly and immersive non faction quest to access the institute and blow them.

Install this mod at any time in any game to receive a [.SKK Fast STOP Institute] menu activation item in AID inventory (after leaving Vault 111). It makes ZERO changes to your savegame world until activated, to pop a menu:

If quest MQ302 Nuclear Option is already running or the institute has been destroyed, the mod lets you know and shuts down to leave nothing enabled or running behind.

(1) CANCEL to do this later. If you loose the activator item, craft a spare in the usual [Utility] ChemLab.

(2) START the Mission If you are already a member of the institute you can start the sabotage immediately with an email. Otherwise the quest starts with an Institute agent who is looking for the player in the Commonwealth.

The mission is documented and marked, taking between 10 and 60 minutes to complete depending if you already have relay access, if you use a disguise to avoid hostility or want to break in to do the job loud and hard. If you do not use the relay in, your companion(s) will be able to follow you. If you are not a combat god, the mission may be a little sporty below player level 10 in survival.

You do not need to be a member of any factions and can do this at Level 1 straight out of Vault 111. Faction states will be similar to the base game if you were or were not a member of them at the time of Institute Kick-Out and MQ302 Nuclear Option.

Institute quests InstKickOut​ and MQ302 the Nuclear Option are completed. To enable NPC chatter and checkpoint encounters, a random faction the player is a member of is set as the main quest completion “winners”, or the Minutemen as default if none.

Minutemen radiant quests will keep on coming as long as you keep helping the farmers and suck up to Preston. You may even still be able to blow the BOS with them.

Brotherhood radiant quests are mostly fine, but any quests that depend on the institute will be shutdown or not available to start. You may even still be able to blow the RR with them.

Railroad is likely to be hostile due to the extensive vending machine damage, even if you are a member and issued the evacuation order. The base game is rather fickle and buggy unless a totally specific set of quests have been completed before the Nuclear Option (see the wiki).

TO BE CLEAR to allow this to run “at any time in any game” the range of possible faction quest states this could run in is simply to complex to manage with any certainty so it does not handle any other quests. It shakes up the current quest ingredients and deliver something slightly different.  If you want to exactly follow the predictable base game quests, or a list of failed quests in the log trigger you then DON’T USE THIS MOD (or moan at me).

If you had not already joined the Institute, you can still go back and do any of the pre-Institute quests from Act 1 and 2  that don’t depend on the Railroad up to MQ206 the Molecular Level. Rescue Nick, Kill Kellogg, find Vergil, join the Minutemen, join the Brotherhood no problem.

The mod has no dependencies on extenders or DLCs and does not change any existing base game scripts, assets or objects. This means that it has no load order dependencies, but, if any of your mods mess with Institute doors, triggers or activators this mod may not be able to unlock/open them for access.

(1) If you are not a member of the institute and have not triggered the kick-out, you can use the Emergency Relay function to exit the institute and loop around as many times as you like. But you can not fast travel or relay back in, you must walk. For the immersion !

(2) If you are running survival mode and not a member of the institute you may receive constant message notifications in the institute concourse that you can fast travel between CIT and the Institute. Can’t remove them without hacking the base game HC_Manager script.

Do not disable this mod between starting the mission and the quest [ Institutum delenda est ] completing. Only remove mods if you are happy to accept potential conflicts from load order changes in a save game. If that is unclear, best to be safe and don’t ever remove mods from a savegame.

(1) Why is there no ESL version ? Because life already contains sufficient hassle.

(2) Why an aid item menu rather than MCM ? Because 90% of SKK mod users like to blow stuff on Xbox.

(3) If you don’t get the menu activator and CBA to craft one, or having another item in your inventory triggers your OCD, you can start this from the console [  cqf SKK_FSIControl “SKK_FSIControlScript.ActivatorMenu” ]

(4) Why are there so few quest mods for Fallout 4 ? The transmitter, explosion and institute shutdown which most will use multiple times took 4 hours to produce. The intricate multi path lore friendly quest wrapper which may be used by one person once took 40 hours of complex engineering. That effort is probably why.

UPDATE NOTES: All updates so far are additive, do not affect the current game so fine to update in place at any time. Requires Fallout4.exe updated to 1.10.162.0 (or later).
Update: OnDeath bailout counter to avoid the quest getting stuck on IsInCombat test.
Update: fix script/quest error that can cause the Institute agent to be lost during a save/load game.

Fix: Emergency Relay locked if player has not joined institute but triggers kickout. If you have this condition update, then console [reloadscript SKK_FSIQuestScript]