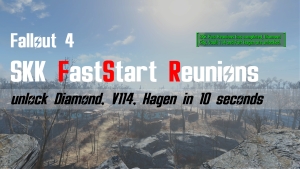 If you start new games to do different stuff in the Fallout 4 world and can’t face the same old main quest scenes, or just want non-linear choice, this will bypass a significant chunk without affecting any other quests you may or may not want to do. That includes the rest of the main quest line with fragile Dangerous Minds, all working.

> No hostile NPCs were harmed during the production of this mod, that’s something you still need to do for yourself. Remember: trousers before shoes.

This Fast Reunions mod must be enabled before you visit Diamond City or Vault 114, otherwise you will be notified that the state of your save game world is too complex for the mod to run. For a quick do-over use SKK Fast Start New Game to start a new game less than 3 minutes and this mod will run fine.

This mod will automatically start anytime after you exit Vault 111 and prompt with an offer to run which you can accept or decline, so it can stay in your load order when you don’t want it to run. If you decline the mod will do nothing and shut down, otherwise:

If you want to disable the mod for any reason, to allow a graceful shutdown with a notification message, you must either:

(A) Visit the Diamond City entrance so the gate animation can clear (there is a misc quest marker reminder), and;

(B) If you don’t want to ever use that door, and have access to the PC console [ cqf skk_fr “SKK_FastReunionsMainScript.ShutDown” ]

The mod has no dependencies on extenders or DLCs and does not change any existing base game scripts, assets or objects. Yes that’s right, no hacked base game scripts infecting your system. Wow!  As with 99% of SKK mods, its 100% pure new Creation Kit forms and intervention scripts. This means that it has no load order dependency and can be safely disabled once the door animation states meet your needs.

If you have a significant load order there can be a massive bottleneck of mod processing activity at Vault exit (MQ102 Stage 10/15) causing mods to block each other. Put SKK Fast* bypass mod at the top of your load order so they get processing priority to complete: SKK FastStart; SKK FastReunions.

If you have mods that already mess with the base game configuration using hacked scripts, quests, locations or companions covered by this mod, there are likely to be issues. Please do not try and use this mod, I am not interested in compatibiltiy issues with hacks. Even my own hacks.

(1) You may have to initiate dialogue several times with Nick, Piper or Dogmeat to clear out idle comments and crotch sniffs before they offer companionship option.

(2)  No XP is awarded for the auto-completed quests, and they are not logged in the PipBoy, as the sequential quest start and complete messages take far too long to display (8 real minutes back:back). This solution does not support bizarre desires like wanting to bypass the main quest grind, yet still have them all neatly logged. Go earn them the hard way. Again.

(3) Amazing Follower Tweaks (AFT) and this mod clash on enabling Dogmeat as a companion. If you want to run both, it is unlikely you can have dog as a companion.

(5) This may appear to work with Synthetic Player (which I also created), but conflicts on MQ106 Fort Hagen triggers. It sortof kindof works but dont invest game time.

> Can I run this back to back with SKK Fast Start new game ? Yes.

> Can I run this before or after the BOS arrives early with SKK Fast BOS ? Yes.

> Can I run this to collect the Kellogg CerialKiller companion ? Yes totally, one of the reasons for publishing this is to make Companion Kellogg more accessible for bad deeds and OverBossNess.

> Why is there no ESL version ? Because life already contains sufficient hassle.

> Why is this not part of SKK FastStart ? Because it works with vault exit savegames as well, and I like choice.

> What about the coffee cups ? The in game coffee cup count is not affected.

Copy SKKFastReunions.esp and  SKKFastReunions – Main.BA2 to your…\Fallout 4\Data directory, enable in the Bethesda mod menu, mod manger or whatever.  Removal is the reverse, as long as the shutdown conditions are met. Only remove mods if you are happy to accept potential conflicts from load order changes in a save game.

Fix for Mayor getting stuck at his wall speech mark DialogueDiamondCityMayorWallSpeech.SetStage(100)

Added Initial run [YES NO] question so the mod can stay in a load order when not needed for a particular new game start.
Removed Sanctuary workshop take ownership toolbox as Codsworth issue has stopped.

Trap Ellie trying to block the detective case files after giving the coat and caps.

If Dog has never been companion, suppress cigar sniffing to offer “Come On Boy” follower option.