start a new game in under 2 minutes 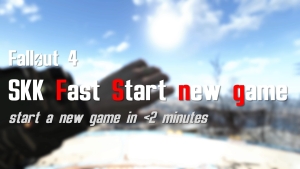 FastStart a new game in less than 2 minutes from Main menu > Looks menu > SPECIAL menu > Outside Vault 111 with most mod added inventory items. This is a scripted bypass, not a static savegame so you get full player customisation and fresh RNG.

If you often start new games and are bored of the tiresome-after-the-3rd-time initial dialogue or the same RNG baked into a static save game, this will help get new excitement faster.

You start with the usual Looks menu mirror scene then straight to name, rank and SPECIAL stats. Relax for 20 seconds to emerge from the elevator ready to go. If you know the face and stats you want, this can all be done in less than 2 minutes.

The player starts outside Vault 111 with basic vault gear along with holotapes and stuff other mods have added after looksmenu.

If you want to customise the player loadout, xEdit the LeveledItem list SKK_FSNGPlayerEquipment. The script is hardcoded to autoequip  PipBoy, Armor_Vault111_Underwear, Armor_WeddingRing, 10mm if they are in inventory. It will not know about any replacements you make, so best not to replace the default Pipboy.

All base game Vault 111 animations are fully working and primed to automatcally run/open if you want to return to the vault. Includes the elevator, gear door, locked doors, spouse & etc as long as they have not been messed with by something else. If you want the Cryolator use a force unlock solution like Open Anything.

If you are looking to replace an all-in-one ALT start mod and want to start from different locations/levels, install both SKK Fast Start New Game *and* SKK Fast Start Location as SKK solutions are built on modular choices.

This solution has no dependencies on extenders or DLCs and does not change any existing base game scripts, assets or objects. It is 100% pure new Creation Kit forms and scripts which means that it works on PC , Xbox and GamePass. As it does not touch any other stuff in your save-game, there should be no load order issues or conflicts with quality mods.

(1) Whatever Creation Club Content that has been stopping the Vault 111 door from opening during a normal game start.

(3) Mods that try to pop UI dialogs after the looksmenu mirror scene whilst this is trying to get the player out of the vault.

(1) There is an issue with mods or CC content that replace, modify or re-texture the Pip-Boy which will can become invisible. There is a [ Toolbox of Pipboy fixing ] under the Vault 111 external control cabin which re-adds and equips a base game pip-boy on the player. If that still has no effect, you clearly have a very naughty mod. Best to add and enable them after the player is in the Commonwealth so they  can do whatever they do to the game to load correctly.

(2) If you want to return to V111 for rings, Cryolator and the vault door which will open for you when 3d loads, but the animation takes some time to play out. If mods that mess with v111 stop the ainmation from playing, try to force it with Open Anything or on PC console [ 000330c3.SendAnimEvent “Stage2” ]. If they dont work you clearly have a very naughty mod.

(3) If you have any other mods that try and add items to the player inventory at startup (like holotapes, weapons) and that stuff is not turning up, please ask the mod author to read this article Fallout 4 New Game Quest and Inventory issues problems because the base game clears the player inventory out before this solution can take control and stop that happening.

(4) This fast sequenced solution is not compatible with forced console commands like extended looks menu or mods that pop modal UI messages, so wait until it the player in the Commonwealth to pop the console or enable those mods.

Copy SKKFastStartNewGame.esp and  SKKFastStartNewGame – Main.BA2 to your …\Fallout 4\Data directory, enable in the Bethesda mod menu, mod manger or whatever. Once the player has returned to Vault 111 and activated dead spouse the mod shuts down to idle. Only remove mods if you are happy to accept potential conflicts from load order changes in a save game.

Update Notes: Requires Fallout4.exe 1.10.162.0 (or later). If this is loaded into a game that was started with an older version you will need to use OPEN ANYTHING to trigger the V111 door as the trigger mechanism has changed.
Complete re-write is 200% faster by deferring all V111 opening animations until (if) the player returns to the Vault.
Change: no longer depends on Tutoral quest triggers, so that quest can be disabled.
Change: Does not disable Memory Den side quest FFGoodneighbor01
Change: does not automatically add V111 misc junk to player inventory.
Change: Toolbox of missing Pipboy mesh fixing automatically cleans up if not used OnUnload.
Change: file renamed from SKKFastStart.esp to SKKFastStartNewGame.esp as from numbers have changed.

REPUBLISH VERSION 015 due to the number of infinite black loading screens in 016 and 017.

Force EnablePipboyHDRMask() at multiple points and in the toolbox script for the invisible Pipboy issue.

New toolbox under the V111 control hut (see pictures) when activated runs a script to add a Pipboy (if missing) and/or equip it (if unequipped).

Whatever is trying to set timescale to zero at Vault 111 exit is trapped and overwritten with timescale 20.

Script slowed down to reduce hanging at the vault exit loading screen to less than 10% of new starts.