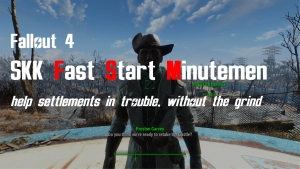 Auto complete some of the initial Minutemen quests to unlock their support without the repetitive grind. Built with SKK Fast Start technology, no changes to base game scripts or assets for 100% main and faction quest completion safety.

This can be installed and enabled at any time in any game before entering the Concord Museum.

It makes no changes to your game until you make a menu selection.

The earliest it will trigger is exiting the Vault 111 elevator.

If you want to choose later you can do anything with the other factions and DLCs, even finish the main quest.

If you enter the Concord Museum to progress When Freedom Calls before making a choice, the mod will notify you and stop. If OK to run, the menu of choices:

Option: [ Give me full quest XP | I don’t want any bogus quest XP ]

I prefer to earn my XP, but get that others like to level fast. If selected, no quest XP will be awarded for the quests auto completed by this mod. Of course it doesn’t affect anything else.

(1) Rescue the gang from Concord

This automatically completes MQ102 Out Of time, MIN00 When Freedom Calls, and Starts MIN01 Sanctuary. Codsworth is enabled to be a companion. The museum is unlocked. Player has ownership of Sanctuary workshop, the gang are sandbox settlers. Preston is ready to have the “Join Minutemen” talk. Mod shuts down.

Includes all of (1) plus MinRecruit00 The First Step is completed (you remember Corvega), MIN01 Sanctuary is completed (player still needs to build the happy making beds and stuff).  Player has ownership of Tenpines workshop. Preston is enabled to be a companion. Player is Minutemen general and given the support flare gun.  Mod shuts down.

Includes all of (1) and (2). Usually the player needs Sanctuary plus 4 settlements with at least one settler each to start MIN02 Taking Independence. This mod safely convinces Preston the condition is met to offer the start the Castle attack dialogue. He will not be companionable until the job is done, but may vomit up some “another settlement needs your help” radiant offers because there is no stopping him without base game hackery.  This mod waits for MIN02 Taking Independence to finish then reduces the timer for MIN03 (Old Guns) to start from 70 hours to zero, but the player must leave the castle for 3D to unload to clean up the Mirelurk mess. Mod shuts down.

The mod shuts down on completion of your chosen option with a notification [ SKK Fast Minutemen has completed ] to help keep your save game clean and minty fresh.

The mod has no dependencies on extenders or DLCs and does not change any existing base game scripts, assets or objects. As with 99% of SKK mods, its 100% pure new Creation Kit forms and scripts. As it does not touch any other stuff in your save-game, there should be no load order issues or mod conflicts. If you run stuff that modifies base game scripts or conditions, that’s on you.

(1) If you have a v003 or older game and the Concord crew try to return to the Museum from Sanctuary, install the optional SKKFastMinutmenPatch004 to fix that trigger.

(2) This works perfectly with SKK Fast Start new game or vault exit savegames. It will not work with other ALT start mods that “forget” to set key new game start triggers for the benefit of others (MQ102.Stage15 specifically, naughty mods). Craft a [ SKK Fast Minutemen Activation Note ] in the utility section of a Chemistry workbench.

(3) You will still need to secure a total of 8 or more Minutemen settlements to trigger the later quest MIN301 Form Ranks. SKK Workshop Ownership Utilities provides a counter display and bumps the quest system to recognise them.

(4) If you don’t select the option to Start the castle quest, but having done it the hard way you want to speed up Old Guns you can from the console:

(5) If you made a mistake activating Preston’s gang and cant take the irritation any more, or if Preston is disrespecting your OverBossness, use Preston is killable to clean up that mess.

Fix: Disable a trigger in the museum that can cause the Concord gang to return to the lobby if Preston is not with them.

If MIN02 is selected, the wait time for MIN03 (Old Guns) to start is reduced from 70 game hours to zero when player leaves the castle location.
Added menu option to do nothing, choose later when run from the activation note.