are they good or bad ? 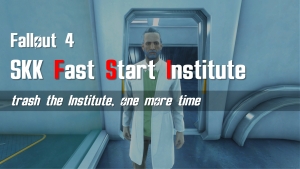 Relay direct to the Institute to accelerate the main quest with any faction, includes a soft kickout option if you don’t want to shoot your way out. Built with SKK Fast Start technology, no changes to base game scripts or assets for 100% main and faction quest completion safety.

This mod can be installed and enabled at any time before being kicked out of or destroying the institute. Enabling the mod after that will pop a shutdown notification.

If the player has already visited the Institute, the mod will enable a soft kickout option. Shooting any named institute member will pop a dialogue asking if you want to shoot your way out, exit gracefully or cool down as it was an honest mistake.

Otherwise a menu pops to select the faction you are a member of to credit for relaying to the institute:

(5) I will choose later, give me a [ SKK Fast Institute Activation Note ]

As faction options are only offered if the player has already joined, if no factions have been joined yet, the menu is:

(3) I need to join a quest helper faction, give me a [ SKK Fast Institute Activation Note ]

If an activation choice is not made, the MISC inventory [ SKK Fast Institute Activation Note ] can be used to launch the menu at any time.

Whilst this mod completes MQ206 The Molecular Level and MQ207 Institutionalized, no experience is awarded for them.

WARNING: If you use the [ I don’t care about quests, just get me in. ] option without a helper faction, do not expect any downstream quests to work. Apart from getting into and joining the institute, there has been zero quest testing and there are complex trigger/condition dependencies on preceding quest stages and variables.  If you are not interested in quests but would like a more immersive institute access option, checkout something like Instant Institute Access.

Otherwise, all the main and faction quests that follow are safe to run as normal. Any preceding main quests that have been skipped can still be run to recruit Piper, Valentine and kill Kellogg or use SKK Fast Start Reunions to auto complete some of them.

within 3 minutes of a new game start.

For the Brotherhood to be offered, quest BOS202 Show No Mercy must be completed. If you want to accelerate that, use SKK Fast BOS to bring the Prydwen after Arcject.

For the Railroad to be offered, RR201 Tradecraft must be completed and membership accepted. There are no SKK Fast solutions to accelerate the freedome of vending machines.

The mod has no dependencies on extenders or DLCs and does not change any existing base game scripts, assets or objects. As with 99% of SKK mods, its 100% pure new Creation Kit forms and scripts. As it does not touch any other stuff in your save-game, there should be no load order issues or mod conflicts. If you run stuff that modifies base game scripts, that’s on you.

To manage the soft kickout option, the mod does not shut down until you are kicked out of the Institute. The mod can be disabled after the [ SKK Fast Institute is shutting down ] or [ SKK Fast Institute has completed ] messages have popped. Only remove mods if you are happy to accept potential conflicts from load order changes in a save game.

(1) If you are running the BOS quest line, there are reported conditions where the the quest BOS203 “From Within” does not advance to target Dr Li. Workaround is to console [ setstage BoS203 30 ]

(2) I installed the mod but no menus or messages popped up. If you are running an ALT start mod that “forgets” to set key new game start triggers for the benefit of others (MQ102.Stage15 specifically, naughty mods) you can craft a [ SKK Fast Institute Activation Note ] in the utility section of a Chemistry workbench.

(3) What about an ESL version ? NO, SKK mods will not be published in ESL format because life contains sufficient hassle.