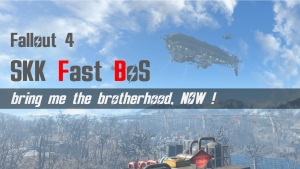 SKK FastBoS triggers the arrival of the Prydwen once the Arcjet Call to Arms quest is completed, so you can do more with the Brotherhood of Steel, without grinding the Main Quest to Reunions.

The Brotherhood of Steel main force is arriving

If you want to do more stuff with/to the Brotherhood of Steel or just enjoy their patrols causing mayhem, but cant face the main quest MQ scenes for the hundredth (real number) time to unlock them, this mod will help.

1. If you have not completed Reunions (Hagen) or Call to Arms (ArcJet), the Prydwen will arrive 6 game hours after you give the transmitter to Danse in Call to Arms. At default 20:1 timescale that’s only 18 real world minutes to kill.

2. If you have not completed Reunions (Hagen) but have completed Call to Arms (ArcJet) and given the transmitter to Danse, the Prydwen arrival will trigger as soon as the mod initialises.

3. If you complete Reunions (Hagen) at any time, the mod shuts down as there is nothing to do.

An archetype for the rigid hydrogen airship is the Hindenburg zeppelin which cruised at 80 mph. The distance from Washington DC to Boston with a hook to approach from the West is 450 miles, and the prevailing wind (see radstorms) is positive coming from the South West. So a travel time of 6 game hours is sensible.

Plus a couple of hours for Danse to get the transmitter back to Cambridge PD so Haylen can fit it, plus 12 hours for the Brotherhood to prep and mobilise (because mobility is their mission) for a total of 20 hours. But, this is a FAST START and in testing I couldn’t be arsed to wait that long dehydrating in survival on a timescale of 1, so the default is 6 game hours.

If this is a problem, you can change the timer at any time before talking to Danse on the way out of ArcJet using the console (PC only)  [set SKK_FBOSTimer to 0.1 ] for the minimum game time hours or [ set SKK_FBOSTimer to 24  ]  for a full game day.

Lore alignment is totally a function of your imagination. But it does make 101% sense in the base game story that the brotherhood actually turn up after the transmitter that calls ’em is fixed. Rather than just popping open some arbitrary door in Fort Hagen and suddenly woo-hoo the reveal, here they are with no logical signpost or rational explanation. Lore <-> My neck beard <-> Entertainment, if you want to argue this head to r/fo4 as I am so not intrested.

This solution has no dependencies on extenders or DLCs and does not change any existing base game scripts, assets or objects. It is 100% pure new Creation Kit forms and scripts which means that it works on PC , Xbox and GamePass. As it does not touch any other stuff in your save-game, there should be no load order issues or mod conflicts.

The Brotherhood of Steel main force is arriving.

Return to the commonwealth and/or step

outside to witness this.

(2) DO NOT Fast Travel, use an interior load door or disable the mod whilst it is running the Prydwen animation sequence between the arrival message and the Shadow of Steel quest start notification. Doing so { may | could | probably | will } have save-game trashing consequences if the animation can not complete playing.

(3) If you are running an alternate game Timescale from the default 20:1 the real life time it takes for the Prydwen to  arrive will be different.

Copy SKKFastBOS.esp and  SKKFastBOS – Main.BA2 to your …\Fallout 4\Data directory, enable in the Bethesda mod menu, mod manger or whatever.  As long as long as the arrival sequence is not running, just disable the mod. Only remove mods if you are happy to accept potential conflicts from load order changes in a save game.  If that is unclear, be safe and don’t ever remove mods from a savegame.

(1) Why does Shadow of Steel not start as soon at the Prydwen enters ? To avoid the Cambridge vertibird ride arriving at the airport before the Prydwen and having nowhere to land. It takes 7 real minutes for the Prydwen to travel from Hagen to the Airport, which is the same time it takes to sprint from Hagen to Cambridge in the normal MQ sequence. That tiny alignment detail is Bethesda craftsmanship that no one really notices.

(2) What about the disabled Hagen command center door if I want to complete MQ Reunions to unlock the Institute or collect your fa-bulous Kellogg CerealKiller companion ? No problem.

(3) What about another Prydwen arrival when I exit Hagen Reunions on the MQ ? Doesn’t happen.

(4)What about Kells, Maxson dialogue and BoS quests ? No problem (see pictures).

(5) What about BoS institute quests From Within and Outside the Wire ? You still need to follow the main quest to unlock the institute.

(6) What about the coffee cups ? The in game coffee cup count is not affected*.