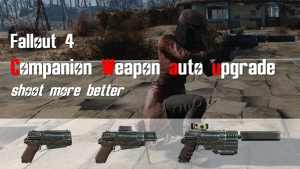 Automatically upgrade base game companion default weapons and shooting perks to match player level. Option to find, move and heal current companion if they are lost.

Companions have default weapons with unlimited ammo that are not visible in inventory to modify.  Whilst companion combat effectiveness is sketchy, they should benefit from default weapon OMOD upgrades and combat perks as the player level progresses to look good and shoot somewhat better.

Install the mod at any time in any game to receive a [ .SKK Companion weapon upgrade Holotape ] holotape in MISC inventory anytime after vault exit which will:

4. Move your companion to the player and heal when they become stuck, lost or fall off Virtibirds.

The auto upgrade runs when you [ >>> SUBMIT ] changes in the holotape, level up or exit the Pip-Boy perk upgrade screen to keep all base game companions up to date.

This does not modify companions irritating combat AI behaviors like standing in front of the player, running into unwinnable fights or starting a deep and meaningful conversations about bollox. That’s RPG actor immersion that is.

Upgrades to the best semi-auto receiver, barrel, grip and sights for that level. Mag doesn’t matter as they don’t reload. If you prefer to upgrade your companion weapons manually through crafting, try CompanionWeapons Are Customizable.

The mod has no dependencies on extenders or DLCs and does not change any base game assets or objects, its 100% pure new Creation Kit forms and scripts. As it does not touch any other stuff in your savegame, you can install at any game stage.

Companion weapon upgrades are persistent across save games so they will stay at whatever state they were if you disable this mod. Companion weapons can be reset to plain vanilla (or whatever you want) through console bat files using companionRef.cf “ObjectReference.AttachModToInventoryItem” WEAPONID OMODID

Copy SKKCompanionWeaponLL.esp and SKKCompanionWeaponLL – Main.BA2 to your …\Fallout 4\Data directory, enable in the Bethesda mod menu, mod manger or whatever. Disable the upgrade function in the holotape before disabling or removing this mod. Only remove mods if you are happy to accept potential conflicts from load order changes in a save game.

(1) DLC Companions will not be added as this mod doesn’t want DLC dependencies, and those companion weapon OMODs can’t be managed using remote masterless calls.

(2) SKK mods will not be published in ESL format due to the MASSIVE maintenance hassle.

Version 007
Update Notes: Update is totally transparent, can be installed in any savegame at any time.
Fix: If COMCurieIsRobot do not equip CompCurieLaserGun

Version 006
Update Notes: All updates so far are totally transparent, can be installed in any savegame at any time. Requires Fallout4.exe updated to 1.10.162.0 (or later).
New: heavy gunner perk applied to companions if perk adds enabled.
New: Option to force equip default weapon