becuase the thousandth time is a chore 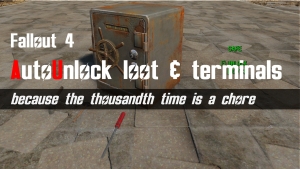 Auto detect locked loot containers, doors and terminals in a radius and unlock them, or add a quick unlock object activation menu option to locked items.

Install this mod at any time in any game, then after leaving Vault 111 the player is given a [ .SKK AutoUnlock  ] holotape (craft spare at the Chemlab [Utility]) to configure options:

(1) When auto unlock radius is enabled, as the player moves through the world the configured radius is scanned for base game loot containers, non teleportation doors and basic Terminals that are locked, unowned and not quest specific objects. If the player has one or more bobby pins and the right perk for the lock level, it is unlocked for you.

The list of door types detected in is limited, as processing the number of doors found in a downtown radius can have a significant performance spike on your system during the detection sweep. Use the option (3) activation menu option on any that are still locked.

(3) A locked object activation menu [R] option button can be added to locked items. QUICK UNLOCK uses player perks and bobbypins. BYPASS any lock forces any lock open regardless of player perks, bobbypins and ownership so does not grant XP or affinity.

(5) If XP is enabled, lockpicking is awarded at the right level but XP for terminal hacking uses the lockpick values as calculating hack values is too much faff. Companion affinity cooldown ensures that max one event is generated per automated search radius.

If things are not auto unlocking on player movement:

1. SKK AutoUnlock is set to enabled in the key configuration – check.
2. At least one bobby pin in MISC inventory (for locks, not terminals fool) – check.
3. Do you have the right perk level – check.
4. It is not owned by someone (red text) – check.
…
5. Then it is not a generic loot container or terminal.

If you would like to force unlock and open complex animated objects like security doors, vault doors, card readers and elevators consider OPEN ANYTHING.

The mod has no dependencies on extenders or DLCs and does not change any existing base game scripts, assets or objects. As with 98% of SKK mods, its 100% pure new Creation Kit forms and scripts. This means that it has no load order dependency.

(1) Objects can only have one additional [R] button activation option. If you already have a mod that adds this (lock, unlock, quick loot) to containers, doors or terminals they will conflict as there is no way to detect each other. You choose.

(2) Some novice level locked locks (~3 in the Commonwealth) are not detected as locked by the activate menu perk due to a flaw in the base game condition system. Scripted auto unlock radius works fine on them, it just is.

Copy SKKAutoUnlock.esp and SKKAutoUnlock – Main.ba2 to your …\Fallout 4\Data directory, enable in the Bethesda mod menu, mod manger or whatever.

You can disable the mod if (1) Player Radius and (3) Unlock Activation are disabled. Only remove mods if you are happy to accept potential conflicts from load order changes in a save game.

(1) What about an ESL version ? SKK mods will not be published in ESL format, because life contains sufficient hassle.

If another holotape triggers you, use thse console commands or write an MCM json.

Update Notes: Transparent update, install at any time. Requires Fallout4.exe 1.10.162.0 (or later)
Change: Removed SKK_AULUnlocked keyword checking that prevents the perks from offering to unlock already unlocked containers as that prevents unlocking after objects have been respawned on cell reset.

Preston is Killable by SKK
Scroll to top