Preston is Killable by SKK

no more settlements need our help 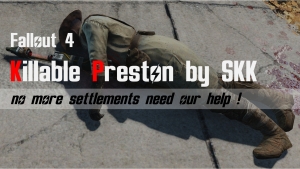 Always wanted to kill Preston ? Assert your OverBossNess, with this mod you can unload in his face, close down all the lame MM quests and still finish the main quest.

BREAK OUT THE SHOVELS, BOYS

Install this mod at any point in any game, if Preston is still alive you will receive a notification that:

[ You may now kill Preston ]

Nothing changes in the game which runs completely standard until the point of no return when the player lands TWO shots on Preston, intentional or collateral. He is booted from all factions, made player hostile and mortal from which there is no coming back.

If his museum crew have not reached Sanctuary they will also turn hostile and mortal, otherwise they will just be normal settlers.

When Preston dies all of the Minutemen player quests, active or latent, are closed down and can not be restarted. There are some hidden MM quests that still run to keep the main quest going. If you already have arty, that surprisingly keeps on working, but Radio Boredom should stop vomiting up those dull-after-the-tenth-time radiants.

What about unowned workshops ? No problem at all, you can take ownership of any Commonwealth workshop either by talking to the local settlers  directly and doing a quest for them, or just killing them. This includes the Mirelurks at the Castle.  That’s right you don’t need to do “Taking Independence” Minutemen quest to own the Castle, it’s built into the base game.

This is just for LOLz to amp up an evil OVERBOSS run, but has been tested at various Main Quest stages and doesn’t affect joining or progressing with BOS, RR or the Institute. The only known wrinkle is when you come to choose who to build the relay with, Preston’s dead body is map marked as an option. You wont get far with him.

If you try to do something obviously stupid like build the relay or blow the institute with the MM and *then* kill Preston, there will be problems completing those quest lines. No, really. I could add lockouts to help you avoid such foolishness, but Vault-Tec have sponsored a social experiment to test your demographic propensity for this sort of stupidity (actual contract words).

(1) If you kill Sturges you will not be able to progress main quest MQ206 The Molecular Level or Brotherhood main quest BOS204 Outside The Wire as the actor is a dependency on the MQ206 network scanner holotape.

As with 97% of SKK mods it doesn’t change any existing base game assets, so there are no load order issues. If you hate it you can disable it whenever you want before killing Preston without affecting your savegame. You can disable it after killing Preston, but neither he or the Minutemen quests are ever coming back to your savegame. Only remove mods if you are happy to accept potential conflicts from load order changes in a save game.

IN DEVELOPMENT
New: If Preston is killed before MQ102 “Out of Time” is completed DialogueCodsworthPostWar is shut down to stop Codsworth constantly returning to Sanctuary.

Public – BREAK OUT THE SHOVELS