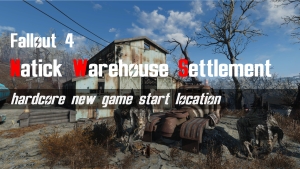 For players wanting more early game combat survival surprises and challenges, a new HARDCORE game starting settlement in Natick to use with SKK FastStart Settlement or a Vault 111 exit savegame. Or install at any point in a current game for another settlement to build out near the Glowing Sea.

A turn around Lake Cochituate is an amped up version of the raider circuit around Sanctuary with Deathclaws, Supermutants and high level Ghouls. Its doable starting with a level 1 player on a survival dead is dead run with care and patience.

A couple cleaned up this scavenging workshop to try and bring some of Corvega’s small vehicles back to life. They had a working relationship with local raiders, but things turned rotten when SuperMutants moved into the town, followed by a pack of Deathclaws attracted by the gore bags. An occasional scavenger has chanced their arm to recover stuff and got eaten: nom nom nom. It’s your turn now.

The map marker starts enabled if you don’t want to use SKK FastStart Settlement, but with time ticking for fast travel you can console [ coc NatickWarehouseExt01 ]

There is enough stuff to start combat with junk for upgrades and building, but ammo is extremely limited. Be flexible swapping weapons, or use a mod that allows ammo crafting (fertilizer and Chemlab are supplied). Do NOT console [ scrapall ] until you have looted everything as good stuff gets lost.

Anyone you happen to meet there may or may not be helpful to you, depending on reasons.

The workshop is properly WorkshopParent registered to assign companions, attract settlers and establish provisioner supply lines if that’s your thing. The build and sandbox area uses the Boston Airport border which extends ~1000 units above the roof.

PC users have two versions to choose from

(1) COMBAT version for performance(25Kb file) This is 100% additive, making zero changes to base game assets for compatibility and performance. This does not allow scrapping of static items in the build area. Work with and around them, or use a quality scrapping mod (if such actually exists). If you have other settlement or scenery mods that may change precombine or previsualisation data in the Natick area, use this file.

(2) BUILD version for scrapping (20Mb file). All static clutter in the build area is broken out of precombine and given recipes to be scrappable. Precombine and Previsualisation regenerated to maintain performance.

Note on breaking precombines to allow scrapping. Before regenerating the Precombine and Prevz information, the frame rate drops from 72 to 20 or 30 in combat. That additional information is there for a reason.

Load this before SKK FastStart Settlement (if using) to ensure the workshop is initialised before you try and select it to start a new game from.

(1) Fallout4.exe update 1.10.162.0 may have broken or conflicts with the BUILD VERSION regenerated static collections and precombines causing parts of the warehouse building to flicker. To fix that I replaced the BUILD version with the COMBAT version in an active save game with no problems.

(2) Why is there no ESL version ? Because life already contains sufficient hassle.

(3) Why are there two versions ? Because I like to provide player choice (function vs performance) within the constraints of the game engine and hardware platforms.

You must NOT disable or remove this mod from a savegame. It registers the workshop with the base game WorkshopParent script list of workshops for full settlement functionality and there is no known method to reverse it. If you remove *any* mod that has added a workshop, you may break all workshops in the game.

Workshop border is a unique asset to avoid map conflicts