when there is too much stuff ! 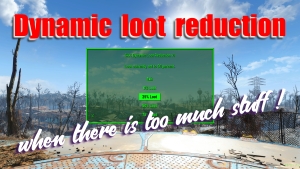 Switch stocking of all base game container loot and placed misc/aid items to where YOU want from 0% to 100% or random. Reduce loot in areas for a challenge then switch back to EZ when your gagging for stuff.

Install this solution at any time in any game and it does absolutley nothing to your in-game loot, unless or until:

(a) Use the [ .SKK Dynamic Loot Reduction ] aid item which is given after vault exit to pop a menu and set the loot chance between 0% and 100% or random. It regenerates after each use, craft at chemlab if lost or never received.

(b) Set the GlobalVariable SKK_DLRLootChance to something less than 100 using xEdit before adding the mod in a savegame which will automatically activate on first load.

(c) PC console [ cqf SKK_DLRQuest “SKK_DLRQuestScript.SwitchLootChance” VALUE ] where VALUE is a percent between 0 (no loot) and 100 (all loot so the solution does nothing) or -1 which is random between 10% and 90%.

This modifies 51 Container_Loot* and 3 LLI_Loot_Lock* base game level lists to add a ChanceNone global variable. If any other mod hard modifies those level lists (not scripted injections), last one in the load order wins. A conflict will not break this solution, it will just do noting to container loot.

If installed in an active save game it will not affect containers that have already 3D loaded to generate their inventory in activated areas until next CellReset (iHoursToRespawn* values).

As the player moves through the world the script finds all placed MISC and POTION objects (excludes spawned / unique / quest / player dropped / player owned ) ONCE in the uGridsToLoad active area around the player and disables them based on Chance value at that time.

Objects are disabled but not deleted to avoid crashing anything that may be linked to them.

Once an item has been found and evaluated by the script it is tagged to be ignored, so any disabled items will not be found and re-enabled if the chance is increased again regardless of cell reset.

This does not touch any spawned loot (e.g. by quests or mods) or any items tagged FeaturedItem / NotJunkjetAmmo to avoid breaking things which is why you will still see some stuff (Deskfans are NotJunkjetAmmo) lying around even with loot set to 0%

(a) If you use an ALT start mod that does not set core quest stages and are not starting in the Commonwealth, craft a menu item at a chemlab/utility as the script will never know when its safe to give you the item.

(b) If you are running Fallout 4-76 OpenWorld disable the built in loot reduction system in its holotape, this evolution is slightly faster. It will need to be lower in the load order for its own Level List hacks to “win”.

Copy SKKDynamicLootReduction.esp and  SKKDynamicLootReduction – Main.BA2 to your …\Fallout 4\Data directory and add to Plugins.txt, or enable in the Bethesda mod menu, use a mod manger or however you organise. When LootChance is set to 100 the script idles so the mod could be removed if you are happy to accept potential conflicts from load order changes in a save game.

cqf SKK_DLRQuest “SKK_DLRQuestScript.SwitchLootChance” VALUE
;VALUE is -1 for random or between 0 and 100 for percent.

set SKK_DLRRandomLootMin to VALUE
;VALUE is 0 to 99 percent for the random minimum floor, default 10.

set SKK_DLRRandomLootMax to VALUE
;VALUE is 1 to 100 percent for the random maximum ceiling used, default 90.