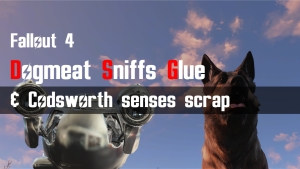 Give Dogmeat some glue (or other scrap) whilst your companion and he will sniff it for you, adding target map markers for any he finds in the active area. Codsworth’s sensors will also detect the same scrap.

Adhesive is the scarce early game resource and Dogmeat’s nose is an under used asset. Whilst Dogmeat is your companion he can sniff glue, and the red toolboxes likely to contain glue in the active area. He will update your PipBoy map using coded barks,  mutated opposable claws at the end of his paws, or whatever immersive nonsense works for you.

If you remove the scrap component or the detection note from companion inventory, or dismiss them the detection will clean up and stop when the player next changes location.

Detection range is the default game loaded & active area, which is a radius of 10K game units around the player (roughly Sanctuary workbench to the statue). You will only be notified of unowned items in the area as theft is bad, mmmkay ?

Not only adhesive, there is more ! Dogment will sniff and Codsworth will sense any (one at a time) of the following:

If you want them to carry scrap or ammo without detecting it, remove the [ SKK Activate scrap detection note ].

Craft Wild Vegetable Starch. There’s heaps of useless rad infested starchy food growing wild around the map that wants to be harvested, but for what ? Codsworth will give you an old General Atomics family recipe during his first detection cycle (any component) so you can make Wild Vegetable Starch for glue. If you give the recipe to your companion, they will use it to detect the wild plant components for you.

In a 15 minute run between Sanctuary, Rocket, Wicked and Egg Rock Pond there are 13 wild Tato, 21 wild Corn and 68 wild Mutfruit … get ’em all and cook up some gluey glue.

The mod has no dependencies on extenders or DLCs and does not change any existing base game scripts, assets or objects. As with 98% of SKK mods, its 100% pure new Creation Kit forms and scripts.

This mod should work with Dogmeat + 1 companion mods. If you have both as companions Dogmeat detection takes priority over Codsworth. Just try it – nothing can break as the mod actually touches nothing in the game.

(1) Junk, red toolboxes and ammo boxes you have already scavenged before enabling this mod scrap detection may be highlighted, even though they are empty until the cell resets. Either activate them to clear the marker, or ignore them. Checking each container contents just takes too long, best to believe that the boxes are sniff proof.

(2) If you are still running this mod when cells reset and the containers refill (between 8 and 24 real life hours @ default 20:1 timescale) they will not be re-marked. Time stamping and unmarking them to re-detect without crippling script performance is work in progress.

To disable, remove the permission note from your companion and change location until the markers clear to keep things clean. The ability to craft Wild Vegetable Starch and any cooked inventory items will of course disappear. Only remove mods if you are happy to accept potential conflicts from load order changes in a save game.

(1) What about an ESL version ? SKK mods will not be published in ESL format, because life contains sufficient hassle.

(2) Would I remove the inference that animals could abuse substances ? Absolutely, no problem as soon as you remove all base game rewards for the human player’s substance and chemical abuse that destroys real lives. Along with torture, cannibalism and … irony ?

IN DEVELOPMENT
UPDATE NOTES: This update is NOT backwards compatible with 006 or earlier. Only use in a game that has not seen SKKDogmeatSniffsGlue.esp. There is detection and warning if you do make the mistake.

Scripts sleep when Dog or Codsworth are not current companions
Detection disabled whilst flying
New activation note to enable/disable detection when junk is in companion inventory.

Do not display found objective for zero found count
Distance trigger replaces inconsistent OnLocationChange with a 5000 unit OnDistanceGreaterThan test.
Added ammo box detection if Dog or Codsworth given 10, 38, 45 or 308 ammo